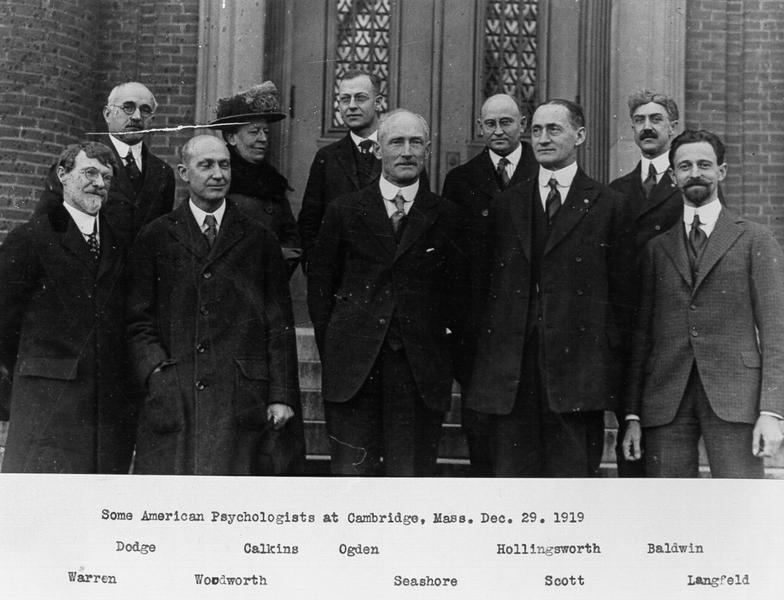 Mary Whiton Calkins is the only woman in the photo.

The fact that the name Mary Whiton Calkins doesn’t ring a bell to most people is the reason that 12 students and their history of psychology professor decided to establish a student award. The award celebrates Calkins' achievements as one of the pioneers of psychology at the turn of the 20th century.

“When you think about psychology, it’s not a very old science and she was there during its infancy in North America. She was there with William James, whom we consider the father of American psychology as we know it,” said Katie McCloskey, a fourth-year psychology student involved in the project.

Despite her accomplishments and meeting all of the requirements for a PhD at Harvard, Calkins was not given the doctorate degree on the basis that she was a woman.

“I think we were all a bit confused, frustrated and maybe a little angry that she was not awarded a PhD,” said McCloskey. With that feeling in mind, they created this award to honour the top undergraduate student in psychology and philosophy.

They hope to present the award to someone who exuded the same qualities that Calkins did — “that persistence, that integrity and just that sheer intelligence,” explained Martina Frackiewicz, a fifth-year psychology student also involved in the process.

The recipient will be asked to write a short essay about how they relate to Calkins’ story in their own lives. The award includes a several hundred dollar scholarship.

While many of the details of the award are still in the works, the message and motivation behind it is clear.

“It’s not really about being a woman because a man or woman can get this award. It's about people denying you things and overcoming that,” said Alan Kingstone, professor of psychology. “She did many things in her field with a lot of integrity. She held her head up high and just went with it. The hope is that people would be able to resonate with that story in their own selves.”

Both Kingstone and the students were surprised and pleased at the willingness of the department of psychology and the Faculty of Arts to help create the award. In fact, Frackiewicz said that after a few quick phone calls and informal meetings, they had been able to secure annual funding.

She cites the universality of Calkins’ story to be a contributing factor to the ease of the process. “You put all this effort in and you’re trying to adhere to their standards and they’re still saying no. I feel like that [kind of story] goes for more than just women as well — it happens across the board and I feel like lots of people have encountered something similar.”

While attempts to petition Harvard to give Calkins her PhD have failed in the past, some of the students also hope to “pick up the torch” on lobbying Harvard. “If you try hard enough and make enough noise, you never know what will change,” said McCloskey.

They are also creating a website where Calkins’ work and research can be archived.

“I think what the students want is to make this a website where we can also start to archive her work, her materials, her life so that it’s not just about Harvard denying her,” said Kingstone. “I think they feel like it’s offensive that that’s her branding — that she’s known for what someone didn’t give her.”

Kingstone and the students expressed their excitement in moving forward in ironing out the final details of the award and in getting Calkins her PhD awarded posthumously.

“People have tried so many times in the past 120 years and nothing has really stuck. But hopefully, with what we’ve gathered and the infrastructure that’s available to us, something will stick and be passed on,” said Frackiewicz.