Tall Wood: Why a wooden skyscraper is a good idea 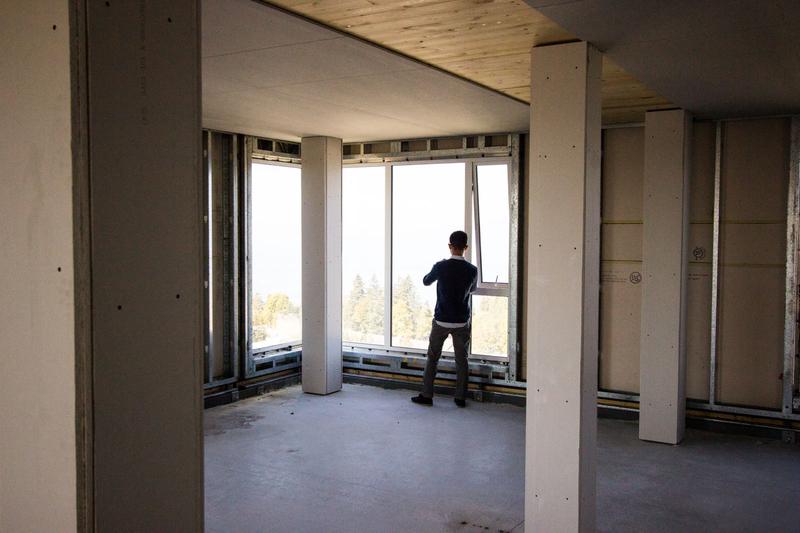 A partially finished floor. The wood columns will be covered in drywall on all but the eighteenth floor.

If wood rots, burns and isn’t great at handling earthquakes, why build an 18-storey resident building out of it?

“We are always asked why do we build in wood and there are three reasons. One, it supports UBC’s goals around sustainability and innovation. Two, it provides learning and research opportunities for UBC students and faculty. Three, it supports the local BC wood product economy as well as the local design community,” said John Metras, the managing director of Infrastructure Development at UBC.

Perry Adebar, UBC’s civil engineering department head and an expert in high-rise concrete buildings, put it a different way.  “I’d love to see timber used more, but I’d hate to see it done for political reasons — I’d like to see it done for the right reasons.”

In 2009, the BC government changed the building code, allowing wood buildings to be six storeys — previously, they had been limited to four storeys. It’s part of a larger move by the wood industry and the BC government to put “wood first.”

Outside of politics, wood is more sustainable. Its production produces less green house gases, wood holds in carbon dioxide. Wood can be locally sourced — at least in BC — and, if forests are sustainably managed, do limited damage to the ecosystems the timber is from.

“Concrete has got one big, giant problem and that’s the environmental aspect. When you produce Portland Cement [a part of concrete], you release all kinds of carbon dioxide and, from an environmental perspective, it’s very bad,” said Adebar. While the industry has responded, improved and become more sustainable, wood is still considered a greener product.

UBC also decided to use wood as part of their “living lab” mindset — the idea that learning and research can and should go beyond the lab. The Centre for Interactive Research on Sustainability at UBC is using the project as a case study for wood structure buildings. In an email statement to The Ubyssey, Angelique Pilon — the centre’s research manager — explained they are working with UBC and the faculties of forestry and engineering on a range of “research and educational projects” on mass timber buildings.

Forestry professor Frank Lam and Carlos Ventura, the director of the Earthquake Engineering Research Facility at UBC, have teamed up to embed moisture sensors, seismic sensors and sensors to detect if the building deforms. While Brock Commons is built to withstand earthquakes, moisture and small amount of deformation, the sensors will allow the professors to collect data and better understand how tall wood buildings work.

Current knowledge is largely limited to computer modelling because Brock Commons is one of the first buildings of its kind.

Wood construction is also beneficial to the BC economy. The wood for Brock Commons is from BC forests. The company that built the CLTs and glulam — Structurlam Products — is based in Penticton, BC. The architecture firm, engineering firms and construction companies that worked on Brock Commons are all BC companies too.

The provincial government has been pushing wood construction since before changing the building code in 2009. Canada’s current Minister of Natural Resources, Jim Carr, said in a press release that “[Brock Commons is] an apt demonstration of how Canada’s forest industry is finding new opportunity through technology and innovation — opening up a world of possibilities for our forest and construction industries.”

This idea of ushering an era of British Columbian and Canadian dominance in forestry and wood construction was echoed over and over again at a Brock Common’s press conference by members of the industry, wood lobbying groups and politicians.

Whether building with mass timber is the future is something only time will tell.