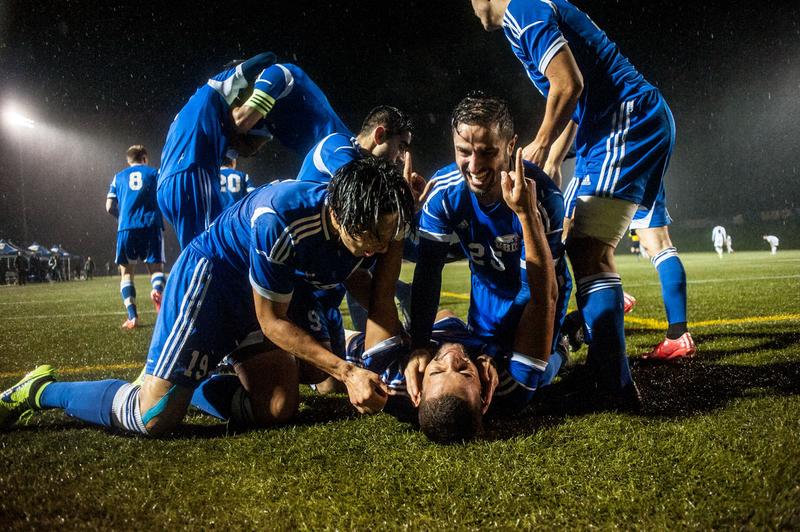 Last season, the Thunderbirds finished undefeated in the regular season and comfortably advanced to the national championships. photo Kosta Prodanovic / The Ubyssey

Although the Thunderbirds missed out on the CIS national championship finals — due to their 5-4 penalty shootout loss in the semi-finals — last season was anything but a failure. Now entering the 2016 season, expectations remain elevated.

“I’m not sure if you can come much closer to achieving the ultimate goal,” head coach Mike Mosher said.

The Thunderbirds finished undefeated in the regular season and comfortably advanced to the national championships. A big contributor to the success was the team’s solid defence. “Last year we had a pretty experienced team ... most notably our goalkeeper, Chad Bush, and central defender, Bryan Fong, and that team conceded the lowest goals in the country,” said Mosher, who was also 2015 Canada West Coach of the Year.

Mosher also believes that by focusing on the defence, the team will have a very good chance to repeat the success that they had in previous years

Following a very solid season in which the only time the team were behind in a game was in the penalty shootout of the national championship semi-finals, Mosher stated that, “it’s pretty tough to improve upon that.”

The challenge will then emerge from the fact that every year is different, with many new players in need of forming team chemistry. When asked about the current situation of the squad, Mosher said, “I like where we’re at.”

The Thunderbirds just wrapped up their preseason with a 1-2-1 record (W-L-D) and with the standards set in last season’s performances, many would consider this a slow start. However, Mosher corrected that “preseason is just that … to prepare you for the season. We could play a bunch of weak teams and win five games by lots of goals, but that does not necessarily prepare us for the season."

"We took an opportunity to go and play two very good NCAA Division 1 teams… and that was an awesome process to go through because we found a lot about areas we have to get better at.”

The team consisted of top-class goal scorers last season such as Sean Einarsson and Gagan Dosanjh. Both are now part of the group of experienced players who have graduated and moved on from the program.

It is difficult to pick out which player will be the biggest threat to opposing sides as there are several promising players. Mosher believes that the loss of experienced players will not be a problem for the coming season because he has many players with potential. Some players mentioned by the head coach were creative attacking player, Kerman Pannu, and center forwards, Liam McManaman and Manpal Brar.

Every season includes tight and competitive matches. When asked which teams would be the biggest threat to UBC this season, Mosher picked out two teams: the University of Fraser Valley Cascades and the University of Victoria Vikes. “I think UFV will be a difficult opponent … they’re always well organized … and they don’t lose many players at all … UVic always presents problems,” Mosher said.

Mosher also stated that, with the reputation of the Thunderbirds, “teams will be gunning for you every single time,” so every game should be entered with the highest preparations.

Despite the fact that 75 per cent of the roster are relatively new players, the objective for the season for Mosher remains high.