David Sidoo on football, charity work, business, and UBC’s Board of Governors 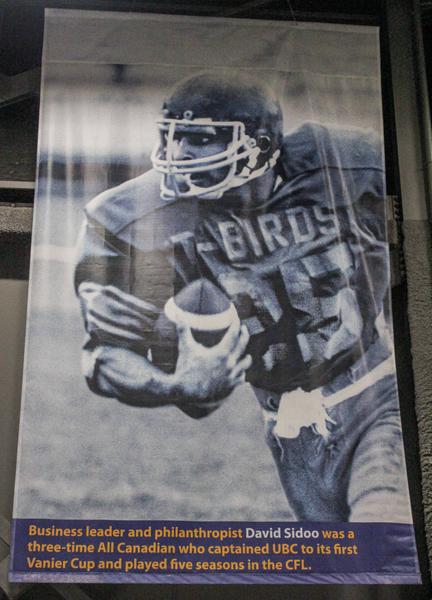 If you’re a fan of UBC football, David Sidoo is a name that you will probably come across at some point.

A native of New Westminster, BC, Sidoo is one of the founding members of the 13th Man Foundation — an organization that has provided off-field support for UBC football since 2014. In 1978, Sidoo came to UBC and played for the varsity football team where he was a record-breaking kick returner and three-time All-Star and All-Canadian defensive back. He also helped the T-Birds capture their first Vanier Cup title in 1982.

A lesson that Sidoo took away from his time as a T-Bird was the importance of helping the community, which gave him the motivation to establish the 13th Man Foundation.

“Our coaches back then instilled in us to be good community leaders and give back when you have a chance, and a lot of us that went on to become successful in business never forgot that,” said Sidoo.

“We’re giving back to UBC because UBC gave a lot to us.”

Sidoo’s belief in aiding the community goes beyond the UBC football team. Another organization that Sidoo established is Sidoo Family Givings (SFG), which he and his family founded in 2006 to support families of underprivileged and at-risk youths. While growing up, Sidoo experienced first-hand the many difficulties that such families go through.

“[My family wasn’t] wealthy at all by any stretch of imagination and I went to school sometimes without breakfast in the morning,” said Sidoo.

His inspiration to become a football player came at the age of eight, when he was in a hospital recovering from tonsil removal surgery. “It was the first time I was away from my family and I was crying so bad that I wanted to leave the hospital. My dad got me a TV in the room, so I’d scroll through the television and then I started watching NFL football,” said Sidoo.

Sidoo began playing flag football competitively after leaving the hospital and it was from there that he developed his passion for the sport. After his varsity career at UBC, Sidoo went on to play five years of professional football with the Saskatchewan Roughriders in the Canadian Football League (CFL).

He retired from football in 1988 and became a partner at Yorkton Securities before entering a career in investment banking in 1999. 17 years later, Sidoo is the president and CEO of East West Petroleum, and has previously sat on the board of other oil and gas companies.

Many concepts that Sidoo learnt from being a football player continue to be applicable to his current career in business, especially in the area of team dynamics.

“I think the skills of leadership, being a team player and going through tough times on the field - that happens in business and life all the time,” said Sidoo.

Sidoo is also a UBC Board of Governors member (BoG), which he also describes as having many of the same characteristics of a football team. “There’s some good times, there’s some bad times and there’s some tough times, but primarily, they’re a great group of people. They’re all volunteers,” said Sidoo.

Even with the many issues that the BoG came across over the past year, Sidoo said that it is all part of a “learning curve” and that the members ultimately do strive to work in the interest of the university.

From his talent as a football player to his successes in business and contributions to the local community, Sidoo has earned numerous awards and recognitions. He is an inductee in the UBC Sports Hall of Fame and the BC Football Hall of Fame. The David Sidoo Field at Thunderbird Stadium is also named after him. Sidoo’s most prestigious recognition to date is his appointment to the Order of British Columbia - the highest honour in the province.

For Sidoo, the most memorable part of the 1982 Vanier Cup Championship was “the pride [the T-Birds] had and the pride the university had.” This year, he hopes that UBC will set a new record for attendance at Homecoming with over 10,000 spectators.

“I think that pride is starting to come back to UBC now and athletics is a great way of engaging the community [and] the students at UBC,” said Sidoo.