Why the Tall Wood building is fireproof (and ahead of schedule) 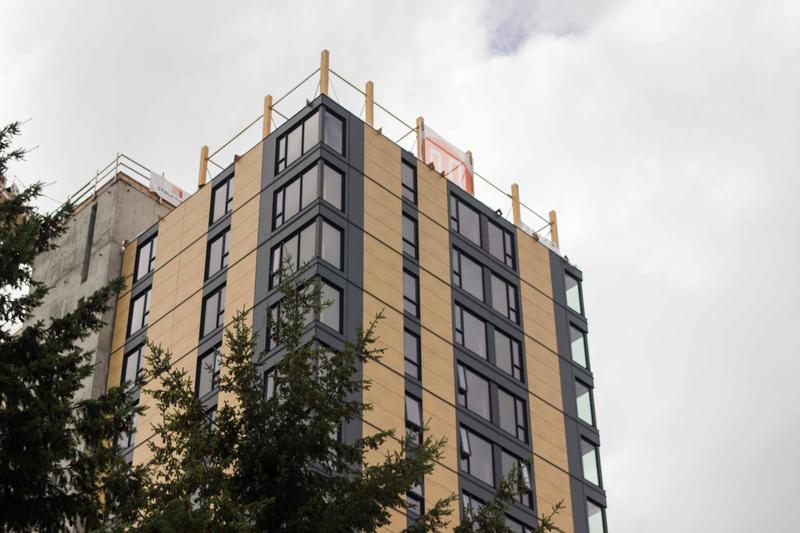 Contrasting Walter Gage like day to night, the Tall Wood Building, officially named Brock Commons, has been rising up on the horizon of campus at an impressive speed and with a refreshingly new aesthetic. In a campus largely dominated by glass and concrete, to have a structure whose composition is largely wood-based marks a remarkably bold move on the part of those involved.

Wood is not uncommon in modern architecture, UBC's campus being an excellent example. However, in most cases its usage rarely exceeds a stylistic choice, with concrete still making up the skeleton or the structure.

Brock Commons is the product of the lauded, Vancouver-based architecture firm Acton Ostry. Acton Ostry's work can be seen around campus, from the 2008 renovation of the Friedman Building, the 2014 renovation and expansion of the Sauder School of Business, the Hillel Student Centre and the new Aquatic Centre.

Brock Commons will house 404 students in 272 studios and 33 four-bedroom apartments. It will also have social and study spaces for upper-years, graduate students and a lounge for commuter students, according to UBC.

The building will be one of the tallest wood building in the world and had to get special approval because it exceeded the building code's height regulation for wood structures.

Russel Acton, one of the two principals at Acton Ostry, explained that the wood building is environmentally conscious, more sustainable and produces less waste that other building materials. It is also more fireproof that you might think.

"Have you been up through forest fire country after a forest fire has been through? So you see all these trees? They’re standing and haven't fallen down," said Acton. He explained that fire will burn through the first layers of wood and then stop. "The reason why it stops is that in the depth of that charcoal layer, oxygen can’t get into the wood to keep the combustion process going."

Acton said that is why you have to poke a prod a piece of firewood to get it to burn completely. Trees use this property to protect themselves from forest fires. Sequoias can survive wildfires due to a thick bark coat that won't burn completely. The tree is damaged in the fire, but survives, and can continue growing because the tree's innards are unaffected.

Similarly, a wood building constructed from cross laminated timber floor panels and glulam — glue laminated timber — pillars offers remarkably sound structural integrity, even after damage from a fire. When put under stress tests early in development, the wooden components were reported to have surpassed their expected breaking points, providing further evidence for its viability as a common building material, according to Acton.

Acton said wood for the building is from land in Penticton and Kelowna.

The building is scheduled to open in September of 2017 but Metras said the building should be opening even earlier, in late spring of 2017.