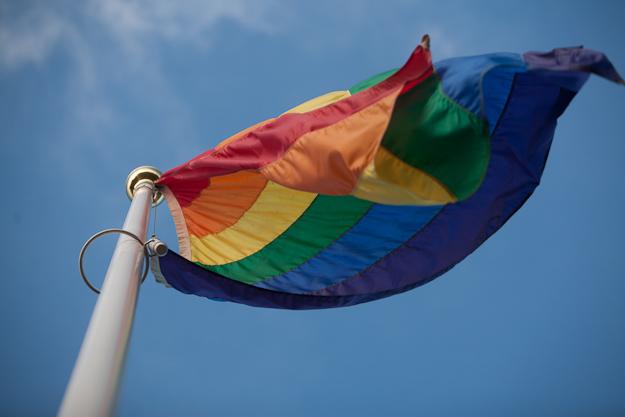 The pride flag was flying outside the Old SUB for Pride Collective at UBC's OUTweek, where it was burned down over the weekend. photo Josh Curran / The Ubyssey

UPDATE 4:39 p.m.: The university has announced that the person responsible for the burning has been identified.

“We are confident we have identified the person responsible for burning the rainbow flag,” said Sara-Jane Finlay, UBC associate VP equity and inclusion, in a statement released this afternoon. “We believe this was an isolated incident. The university will continue to cooperate with the RCMP regarding their investigation.”

As support continues to flow in for the LGBTQ+ community at the university, an investigation by the RCMP is ongoing to identify the person or persons who burned down the rainbow flag that was flying for OUTweek, put on by the Pride Collective at UBC.

“We are working with some witnesses,” said Sergeant Drew Grainger, with the university detachment of the RCMP, regarding the progress of the investigation. “We’re working with them to try to develop a person of interest profile.”

According to Grainger, it is unclear whether the RCMP will be able to identify the person soon. The duration of the investigation “all depends on how well those interviews [with witnesses] go.”

Fifth-year political science major Cheneil Antony-Hale posted on Facebook yesterday announcing that she witnessed the person burning the flag down. She stated that the act took place on Sunday around 2:30 p.m.

As Antony-Hale passed by the flagpole outside the old SUB, she thought she recognized a person standing there with a heap of burning cloth at their feet.

“I just assumed they were doing some kind of ritual or it was the end of midterms and they were burning their material – I had no idea,” she said. “It was 2:30 p.m. in the middle of the day, they were just standing there and they were looking at me.”

She has since gone to the RCMP with her information.

Although she was unwilling to disclose the name of who she believes is responsible, she noted that, in retrospect, it feels strange how normal the burning seemed at the time.

“I don’t think this individual poses a threat if people in the LGBTQ+ community are afraid of that,” said Antony-Hale. “Just because they didn't look very threatening and it was one person.”

At this time, police are not considering the incident a hate crime.

“We have nothing to say that it is a hate crime right yet. There’s no motivating factor yet to determine if it’d be a hate crime,” said Grainger. “It’s not a hate crime as far as we’re concerned at this point.”