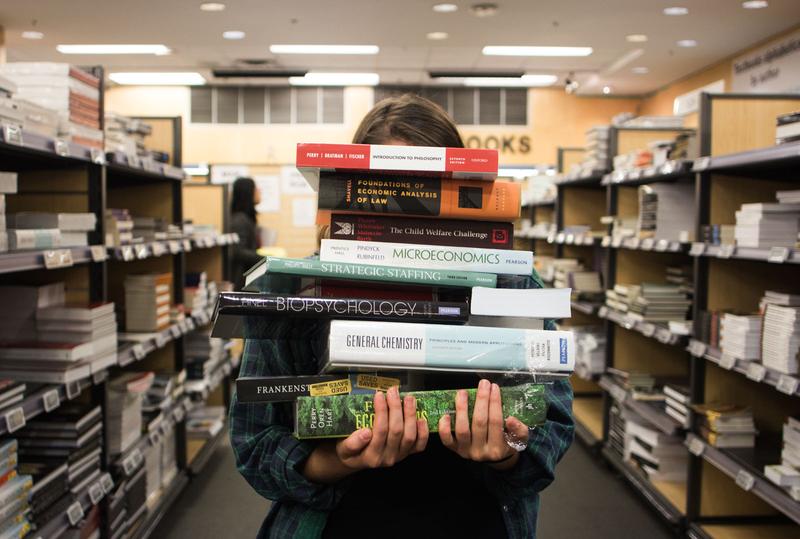 “Students are just not purchasing their textbooks because of the costs of them,” said Erin Fields, flexible learning coordinator at the UBC Library. “If it’s a choice between being able to live and to have food, or spending thousands of dollars on textbooks for one term, the choice becomes really a simple one for a student to make.”

The financial burden placed on students is nothing new. Living expenses, tuition and textbooks all contribute to students' concerns about being able to afford their education. When the bills pile up, required readings can seem like an optional expense.

“There’s no way that this escalation of prices, especially on academic sources, journals and resources, can increase,” said Jenna Omassi, former AMS VP Academic in an interview with The Ubyssey near the end of her term. “At a certain point, everyone’s going to have to say no or find something else to rely on and that something else could be and should be open.”

Some faculty at UBC have been trying to alleviate financial pressures on students by leveraging technologies to help make learning more flexible. According to Loch Brown, a geography professor, open educational resources and open textbooks are a very easy way to do this.

For Brown, utilizing open educational resources was a no-brainer when it came time to update some of the courses in the geography department.

“We were building a lot of interesting course materials and educational resources, and we decided quite early on that we would just share these with everybody,” said Brown.

“With open textbooks, you have the ability to use a textbook that doesn’t cost the students money, but also has the ability for the instructor to take it, modify it and use it outside of the course. You’re not bound by a new edition coming out and students now having to pay for it,” said Fields.

However, it’s easier said than done for open textbooks to completely replace physical copies for a number of reasons.

“Textbook companies do a really good job of packaging a book itself for automatic use,” said Fields. “The decision then to look outside of those resources is harder to make for people because they are getting something delivered directly to them.”

Issues can arise because many professors aren’t equipped with the tools or knowledge to make their textbooks accessible openly.

“It’s not easy because you have to make the infrastructure to put things online,” said Christina Hendricks, an open education fellow and philosophy professor. “I think there are people who would be willing to [make their textbooks open], they just don’t have the time or the knowledge of how to do it.”

According to Brown, another large setback for the open movement lies in the mindset of fellow faculty members.

“The whole incentive system that’s set up kind of encourages faculty to hold onto their intellectual property and their courses as well. They don’t share their courses with the world —they guard them. I think we need to shift our mindset around that,” said Brown.

Despite these obstacles, various groups are hard at work to keep the open education movement moving forward. Fields credits the student advocacy of AMS groups and their campaigns around the major drive currently seen in the movement.

Although discussions on open education started happening on campus last year, the complete transition will be a long time coming. Omassi estimates it will be a generational shift and won't be realized approximately 40 years from now, but she's hopeful that it can be accomplished sooner.

“Thinking about the tiny move in one year is actually really great. People are talking about it,” said Omassi. “And that’s how we have to keep going … so that we can make open a little bit better known and change the culture surrounding academic publishing.”