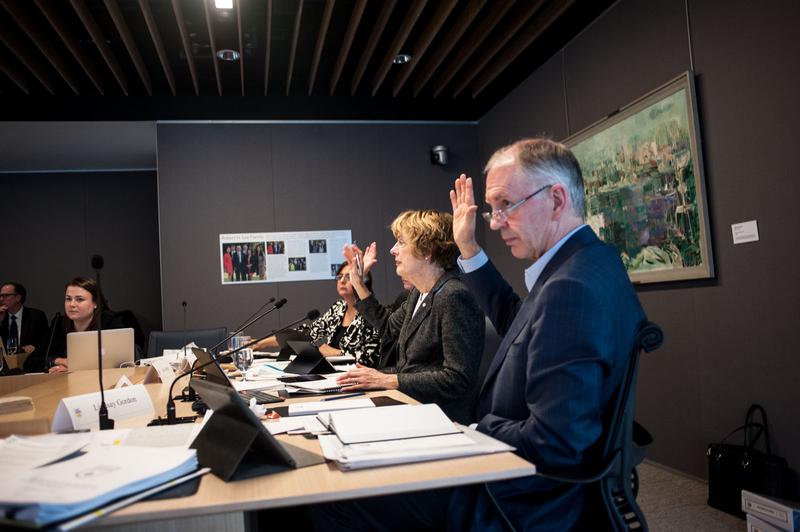 Lindsay Gordon, chancellor, sits next to Martha Piper, interim president, at the December 2015 board meeting. photo Kosta Prodanovic / The Ubyssey

The UBC Board of Governors’ ongoing crisis is not letting up any time soon. The Faculty Association’s passage of a no confidence motion is the latest in a string of challenges the board faced this year due to criticisms over its lack of transparency and questionable governing practices.

The Ubyssey sat down with Stuart Belkin, the board’s new provincially-appointed chair, to get his view on the troubled governing body’s governance issues.

The main takeaway? He lays the blame for the issues of the last eight months — a president resigning, secret meetings and accusations of infringement on academic freedom, to name a few — at the feet of the governors in charge at the time.

“I think governance is always somewhat expressive of the gang that are there doing it at any one point in time,” said Belkin. “At this point in my thinking I would be inclined to the view that it’s more a stylistic issue than a structural issue.”

He points to the historical success of the bicameral system of governance — a senate that deals with academic affairs and a board which is in charge of fiduciary matters — as evidence that the issues were personality-based, not inherent in the system.

“I would expect to see some style changes that are just naturally going to occur when you change the people,” he continued, speaking highly about the new board members and the potential they bring — notably student representative Aaron Bailey.

“I hope that a leadership approach will influence the way that the board does its business,” he said. “My sense is that the board is a very committed group of people [with] a great deal of passion about the university, but we’ve got two new students coming in the next few weeks, we’ve got five of the appointed members of the board that are new in the last little while.”

His own leadership style, he says, is focused on facilitating discussion between members of the board, as well as what many would call an overdue emphasis on transparency.

“As an example of my preference to do things in public, I had overtures from a number of these constituents to meet privately to hear their reviews in the first few weeks of assuming the role as chair of the board,” said Belkin. “That didn’t feel right to me. I’m leading the board but it’s a group initiative and if there’s something significant to be said about the group’s performance … it should be said to everybody.”

I would expect to see some style changes that are just naturally going to occur when you change the people.

— Stuart Belkin, chair of the Board of Governors

He also reiterated a commitment to take a more critical look at items discussed in closed sessions of committee meetings, citing a recent example of which buildings needed a seismic upgrade — a discussion which happened in camera.

“I found myself thinking, ‘Why?’” asked Belkin. “There was news about a building being a lousy place to be in the event of an earthquake. I’d kind of rather knew everybody knew that.”

The amount of work that happens in closed session has been widely criticized in the past.

“There’s an opportunity to do more of the board’s work [in open], but again, I’m not going to be critical of the past practices, I’m just going to say that’s a little bit of my style. I would say, ‘Why not do it in public session?’” said Belkin.

In the long term, his goal as chair is to ensure a process to solidify the diversity of board members at UBC.

He also decried the negative connotation with having business people on board, explaining that they have abilities others don’t — such as knowledge of financial matters or how to do a performance review.

“There is a reticence about some of the people that bring those skills, particularly the word ‘corporate life’ or ‘corporate experience’ is often used as a label for a negative,” said Belkin. “This is a large, complex organization, there needs to be some experience operating in that environment and navigating that environment on the board. This is not a company, it’s a very unique construction, a university, but it takes elements of all those different worlds to be successful.”

Overall, Belkin says he is looking forward to hearing the concerns of the Faculty Association next week and working with them to better the university. He’s also positive about the future of the board and UBC in general.

“It’s easy to be critical when you’ve hit a pothole but it’s important to … take stock of what’s surrounds us and realize what’s been created in a hundred years, the people that created it and how they did it,” he said.