Deans wade into debate around Board governance issues 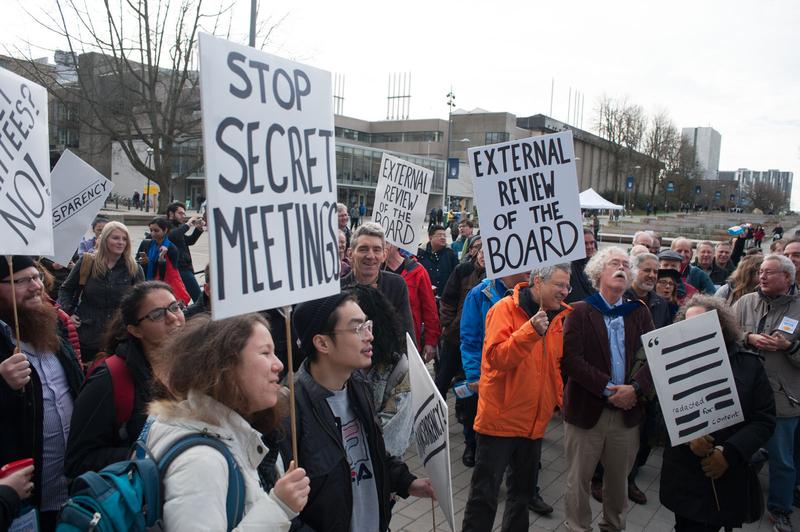 Faculty held a protest at the last Board of Governors meeting on February 2 calling for an external review. Photo Kosta Prodanovic / The Ubyssey

The Faculty Association (FA) at UBC has called multiple times for a vote of no-confidence in the Board of Governors and an external review of the board, but have been met with a hands-off approach from the provincial government and a letter reiterating their support of the board from the deans.

In an open letter sent on February 4 to the new board chair, Stuart Belkin, the FA called again for an external review of the Board of Governors and its governance processes.

“Such a review is essential to restore public trust in the board,” wrote Mark Mac Lean, president of the FA.

The university released a statement in response yesterday.

“We take seriously the concerns expressed about board governance at the university and we are committed to an ongoing evaluation of board processes and the adoption of best practices,” said Belkin and interim President Martha Piper in the written statement. “We are also committed to an open dialogue with the university community about board governance and we welcome the opportunity to discuss concerns that have been expressed by inviting representatives of faculty, students and staff to the April 14 board meeting.”

However this did not satisfy the FA.

“Today’s statement from the board and university administration does not speak to our questions about board management and practices, our concern that the board is operating without properly maintained public records, including publicly accessible email records leading to decisions made by the board, and our concern that the presidential search may be compromised,” said Mac Lean, in a statement released late last night.

Now it seems the deans have waded into the conversation.

“The leadership of the university has the full support of UBC’s deans,” said the leaders of the faculties in a letter obtained by The Ubyssey. They reiterated their commitment to research and teaching at UBC.

Today I wear for all of my colleagues the disrespect that that #UBC's BoG has for the faculty at UBC. It is the saddest day of my career.

“There’s a well-established arrangement for university and board governance in our society and more particularly in British Columbia,” said Andrew Wilkinson, minister of advanced education in BC. “[The board] has a fiduciary duty for looking after the interests of the university and we respect that role and we leave it in their capable hands. The province stays out of the governance of the university.”

“I’m not sure anyone ever said the province wants to take a smaller role given that we send over $700 million a year to UBC,” he told The Ubyssey. “We have an interest on behalf of our 4.5 million citizens to see that the money is well-invested and well-spent and every indication is that does a very good job at UBC in educating the population and providing a research base.”

He emphasized again that the government has no intention of insisting on an external review of the Board of Governors, referring instead to the University Act, which dictates all aspects of university governance.

Wilkinson also cannot imagine a scenario which would involve a board member being asked to step down from their position.