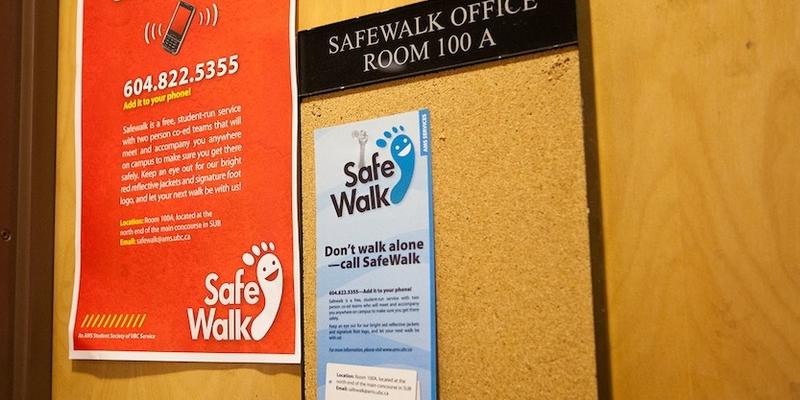 Campus security groups like safewalk denied a UBC student service when she asked that a drunk intruder be escorted home. Photo by Will Mcdonald/The Ubyssey

Two Saturday nights ago, UBC Law Student Jessie Saunders returned to her residence at Green College to find an unknown, highly intoxicated student in her dorm.

Once Saunders had panicked and kicked the intruder out of her room, it became apparent that the underage first year was not a threat but just lost. The boy, who may have lived in Vanier, believed Green College was his home.

Saunders called Safewalk to escort the boy home but they refused her service, citing a policy that prohibits them from escorting overly intoxicated individuals.

She then called Campus Security and the boy’s first-year residence but they both refused to escort the student, citing similar policies.

Saunders, a woman confined to a wheelchair, did not feel comfortable escorting the boy by herself. In the end, he had to walk home alone.

The question of efficacy that the scenario raises is currently being discussed between AMS Security, Campus Security, Safewalk and the Sexual Assault Support Centre.

Saunders fears that something dangerous may befall highly intoxicated students if they try to walk home alone.

“I was concerned that he was going to be falling down or walking into traffic or something because he was so out of it that he literally didn’t know where he was, what he was doing or where he was going,” Saunders said. “What about my safety and this kid’s safety? It’s not safe to just leave him here.”

As a result of these policies, only the RCMP can escort highly intoxicated individuals. Campus Security suggested that Saunders call the police to escort the boy home, but she did not want to get the underage student in trouble.

“I don’t want to get the guy arrested. I just want to get him home safe and not hurt himself or anybody else,” said Saunders.

The RCMP would not comment on how they would have responded to the situation if they were called. According to Corporal Brenda Winpenny, the RCMP cannot comment on hypothetical situations.

Safewalk does not escort individuals who are overly intoxicated due to safety and liability issues, according to the AMS Student Services Manager Ron Gorodetsky,

“If somebody seems aggressive, violent, or uncontrollable, even if they’re able to operate on their own and they don’t need other people’s support to get in the vehicle, we still wouldn’t take them because of the risk of safety,” said Gorodetsky.

According to Gorodetsky, the policy has already received a lot of questions and he is working with Student Services and various other campus organizations to find a solution to the issue.

“In the next few months, we’re going to have a much clearer answer,” said Gorodetsky. “Those people need to get home safe, one way or another, and everybody here agrees,”

Campus Security’s policy is that they will escort an intoxicated person unless they are so drunk that they cannot care for themselves, according to Campus Security Director Barry Eccleton.

“When we have a concern they’re unable to care for themselves, that’s when we have to step back and contact emergency services,” said Eccleton. “If this person starts choking on their own vomit, we can’t look after that.”

Saunders believes that Campus Security should have played a role in responding to the intrusion.

“I would argue in this case they actually had an obligation to the students,” she said. “As soon as somebody calls to say that there’s been an intruder, they should be dispatched, period. No questions asked.”

As a possible response to the situation, Saunders suggests that the university adopt a harm-reduction strategy to ensure that intoxicated students get home safely after a night of drinking.

“Rather than focusing on getting people arrested for being drunk on one hand while refusing to walk them home because of the safety of the security people on the other hand, I really believe that they should be sending somebody home and only arresting that person or starting punitive measures if the situation calls for it, and this situation clearly didn’t call for it,” Saunders said.