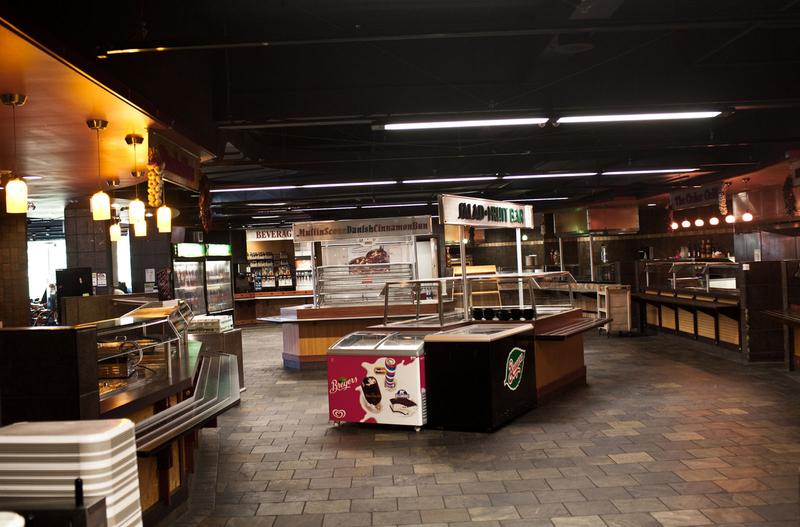 Vanier cafeteria is an example of a UBC Foods Services outlet. photo Josh Curran / The Ubyssey

The AMS has passed three motions detailing how they will oppose the most recent tuition increases currently being discussed by the university and the Board of Governors.

The first motion outlines a fund creation of $20,000 to finance a campaign opposing the tuition increases. The second motion instructs the society to reach out to alumni to ask for their support in opposing the increases. The third motion mandates the AMS to campaign for students to boycott UBC Food Services, a profit-based arm of the university.

“The idea is to put pressure on the university and use it as a point of leverage to say that, if these increases pass, there will be this boycott,” said Eviatar Bach, an executive member of the Social Justice Centre and part of the team who brought the motions to council last night. “Food Services is something that many students purchase on a daily basis and there [are] easy alternatives.”

It was noted during the meeting last night that this could pose potential difficulties for students on meal plans. Alternative methods — such as using the disposable income portion of the meal plan that can be used at non-university venues — were suggested, although no definitive answers were given.

The $20,000 will be put towards transit ads, banners in the Nest, Facebook advertising and other costs associated with advertising.

These motions put forward by the SJC were created partly in response to the AMS statement released last week concerning their official opposition to the tuition increases. Also a factor is their annual general meeting (AGM) at which the SJC called for students to come forward with practical suggestions about how they want their student society to oppose the increases.

“I’m looking for idea generation ... on action that the AMS can take — specifically on protest,” said AMS President Aaron Bailey at the society’s AGM last week.

The motions are in line with the more active stance that the AMS intends to take this year against the tuition increases. The stance is based on the historic mandate passed last year by students at the AGM which called for the society to oppose tuition increases.

“If I’m going to be completely honest, I don’t think the AMS [enacted that mandate] last year in a meaningful way,” said Bailey.

This year, he hopes it will be different. Although he noted that last year’s protests were mainly grassroots-organized, the motions passed last night have outlined some concrete ways in which the AMS will protest the increases.

“What I’ve really committed to doing — and I think the exec and the rest of the AMS is as well — is asking in sessions like [the AGM] … what you actually want us to do and us committing to doing those things,” said Bailey to the students present at the AGM.

For now, the motions seem to be a step in the right direction. “We’re definitely very happy about the outcome and that the AMS is taking a proactive stance on this,” said Bach.

This article was updated to clarify that the fund is not specifically for the SJC, and to provide more details about the motions.