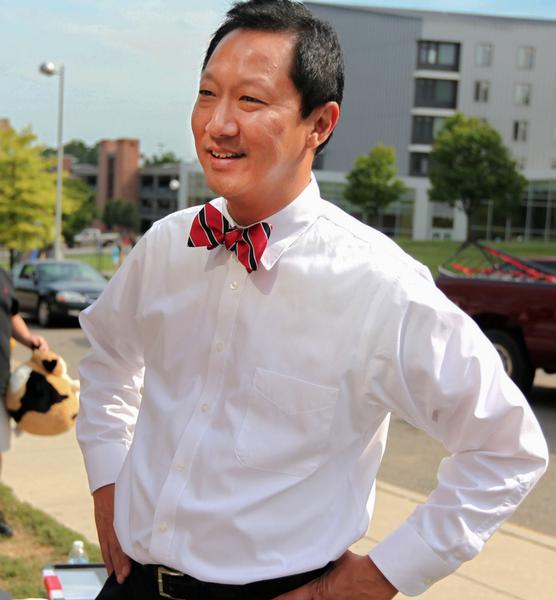 Looking at recent and past articles, profiles and interviews with UBC’s 15th president and vice chancellor Santa Ono, it’s difficult to find anyone who can say a bad thing about the man. Indeed,  in his meeting with The Ubyssey just 24 hours after his appointment was announced, Ono was — though visibly tired thanks to near-constant travel, meetings and interviews — just as engaging and likeable as he appears on paper.

Already developing a very active online presence at UBC, Ono is driving his success on the platform with incredible levels of student engagement — after our interview he insisted on a selfie and we brainstormed ideas for a UBC hashtag along the lines of the University of Cincinnati’s #hottestcollegeinamerica.

Ono really does seem to care — this isn’t just for show.

“The reason I developed a special relationship with the students is that they knew I listened to them in both personal life and through social media,” he said on his affinity with students at the University of Cincinnati. “I miss them. I absolutely love them.”

He plans to continue such close relationships with students at UBC in the same way — by being authentic and honest, by listening and being a true advocate for students.

“When  you’re a president or vice-chancellor of an institution you are, you need to advocate for every part of the institution — there’s the student body, the faculty, the staff, the alumni — you are the individual that they’re turning to,” he said.

Ono plans to be extremely visible throughout his time at UBC, mentioning his excitement for “this funny thing where people jump and try to climb over a wall,” “this other event where everyone jumps into these boats and rows across the water” and “this thing called Block Party at the end of the year.”

Will Ono Storm the Wall?

"If I was younger I’d try to do that," he laughed. "Maybe you’d let me have a head start or something to jump from?"

The University of Cincinnati's Block Party-equivalent has been subsidised by Ono on occasion, when the budget didn’t allow for big-name guests.

“We didn’t get Drake, but we did get Walk the Moon,” said Ono, in reference to UBC’s series of Hotline Bling videos in an effort to attract the singer’s attention. Ono, perhaps surprisingly, believes that UBC’s school spirit isn’t as dire as it has been made out to be.

“I’ve watched what happens on Imagine Day and I’d say it’s brilliant, it’s actually superior to what I’ve seen at a lot of American universities,” he said. He rates the University of Cincinnati at “about a nine” on a school spirit-ometer. “With the success of Imagine Day, I figure this indicates that the potential for school spirit is there, but there needs to be a real strategy to thinking about what happens beyond that first week or first day to continue to bring people together.”

I'm hoping to play some rock and roll on my cello for UBC first year students this year https://t.co/D36gXogtlg

Speaking of bringing people together, Ono has yet to make plans to meet with ex-UBC president Arvind Gupta, although it isn’t out of the question for him. “ I’ve watched some videos and he has some visionary ideas,” he said. “I’d love to talk with him about that.”

An expert in immunology and genetics, Ono plans to speak in various courses throughout the semester.

“It’s one way that I can remain active as a teacher,” he said. “If you don’t teach, you get rusty.”

Not only does Doctor Ono cover the medical side of science scholarship, he once taught an entire course on the history of higher education, and has given lectures on leadership theory and communication. This year, he will publish his latest book: Social Media for Social Good: Presidency in the Digital Age.

Part of this “social good” is, according to Ono, fostering good working relationships with funding bodies so that resources can be balanced between students and education, while maintaining UBC’s mission for being a global research centre. His strategy involves no sacrifice on either end, but to identify additional resources through federal and provincial governments, foundations and finding out where students want resources to go, hence furthering learning at the university.

What does Ono hope to leave UBC with after his term in Vancouver is up? “UBC is in a different place to the University of Cincinnati, already a world-class university,” Ono explained. “Though it’s been some some trying times of late, I hope we can relatively quickly move to a different chapter in the life story of UBC, so we can think how we can truly become one of the greatest universities in the world.”

The culture change initiated during his time in Cincinnati is what Ono is most proud of.

“Achieving culture change in an institution is one of the most difficult things you can do, you can’t just throw money at it, you must have a vision,” he said. Already, Ono is hosting Twitter competitions, retweeting students and faculty and being altogether a wholly wonderful person.

Please ask your dog to DM me so I can send him an invite. https://t.co/Zxu9rQlIaU

Ono wants UBC to feel proud of itself and to have the confidence to move beyond what they originally thought they could achieve. Meeting with the AMS, the Faculty Association, student media and other groups on campus, Ono is looking forward to “long discussions” and online forums with members of UBC’s campus.

Ono seems to be genuinely looking forward to his time at UBC and ready to make big changes to UBC’s culture. Already a recognized face around campus, Ono is stopped every few minutes for a photo, a greeting or an introduction. It’s been a while since UBC has been so engaged with a leadership figure, and Ono is already a hugely welcomed figure on campus.

Charismatic, compelling and very charming, Santa Ono is surprisingly modest about his achievements and seems oblivious to the building levels of hype surrounding him.