There was less than one daily case of COVID-19 per 100,000 residents in the UBC area last week, according to new data released by the BCCDC.

From October 12 to October 18, the UBC neighbourhood had a test positively rate below one per cent, and its daily case rate only went up by one case per 100,000 per day.

The new data — covering the week of October 5 to 11 — revealed that there were on average two new cases per 100,000 UBC area residents each day, down from four last week.

In the fourth week of in-person classes, COVID-19 case rates at UBC remain low, according to new data from the BC Centre for Disease Control (BCCDC). 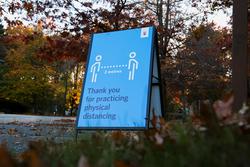 COVID-19 at UBC: Cases continue to fall with a daily rate of just one case per 100,000 residents last week

The rolling average of new cases in the province recently dipped below 350 for the first time since last November — and it continues to decrease.

Data posted on the BCCDC COVID-19 dashboard demonstrates a slight uptick in COVID-19 prevalence on campus as of May 31.

As COVID-19 numbers fall across the province, UBC and its surrounding neighbourhood saw a per capita case rate of zero instances per 100,000 residents between June 1 and June 7.

COVID-19 at UBC: Move to step two of reopening accompanied by slight increase in cases

The data was released July 16 via the BCCDC’s regional COVID-19 dashboard and is composed of data from June 8 to June 14.

The nearby neighbourhoods of West Point Grey and Dunbar also did not record any new cases per capita in the past week, while Shaughnessy reported just one.

The BCCDC detected just one active case of the disease per 100,000 residents on UBC’s Vancouver campus and its surrounding area between June 25 and July 1.

The spread of COVID-19 at UBC has flatlined once again after the university and its surrounding neighbourhood produced no new cases of the disease between July 6 and July 12.

UBC remains a bit lower than surrounding neighbourhoods in terms of vaccination coverage.

As COVID-19 cases surge elsewhere in BC, the prevalence of the virus remains low at UBC.

COVID-19 at UBC: Cases in slight decline on campus amid provincial spike

COVID-19 cases are decreasing once again at UBC after a brief spike last week.

COVID-19 at UBC: Mask and vaccine mandates on the agenda amid fourth wave surge

The latest COVID-19 dashboard update has reported a daily average of eight new cases per 100,000 UBC area residents between August 6 and August 12, with a testing positivity rate of three per cent.

COVID-19 at UBC: Case count remains low as fourth wave continues across BC

UBC has among the fewest COVID-19 cases in the province, according to the latest update to the British Columbia Centre for Disease Control’s (BCCDC) COVID-19 dashboard.

Between August 31 to September 26, the UBC neighbourhood saw a daily case rate of seven per 100,000 residents, up four from last week.