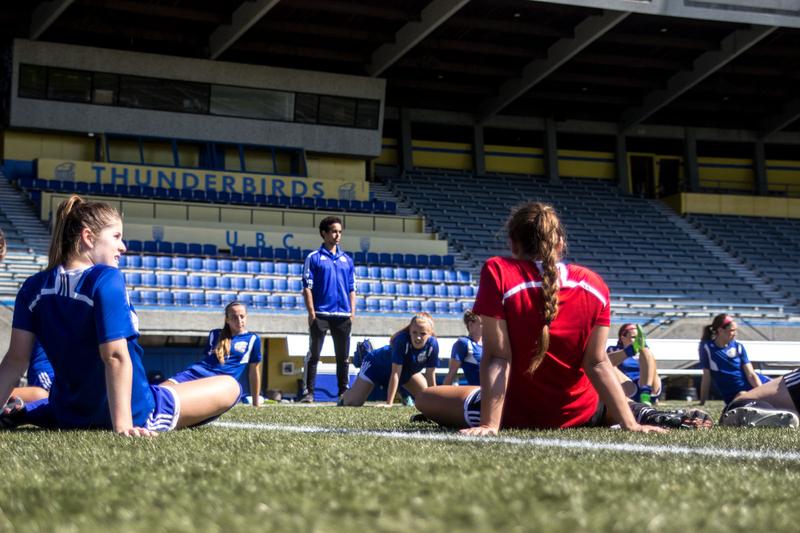 Women's soccer, under new head coach Marisa Kovacs, is is a force to be reckoned with. Photos Koby Michaels / The Ubyssey

Last season, the UBC Thunderbirds women’s soccer team bowed out of the Canada West in the quarterfinals, when they lost 3-1 to the Trinity Western Spartans (TWU) at Roger’s Field in Langley. The next month head coach Andrea Neil resigned, ending her two-year tenure as coach and went on to pursue non-coaching opportunities.

For a winter, the ‘Birds were out in the cold, uncertain about their future.

But their luck turned around in January, when newly hired head coach Marisa Kovacs took leadership of the team. Half a year later, the team seems poised for success, coming out undefeated in preseason competition. They tied the Warner Pacific Knights in their debut with Kovacs and then went on to win their next two games, rolling over Northwest Eagles of Kirkland, Washington with a 7-0 win and then defeating Western Washington Vikings 2-1 in the preseason wrap up.

But winning was not Kovacs' only goal during the preseason.

“My biggest goal as a coach in this preseason was not only getting us prepared with tactics and technical work, but more so, bringing the team together,” said Kovacs, a native of Windsor, ON. “Team camaraderie, team cohesion, team bonding.” 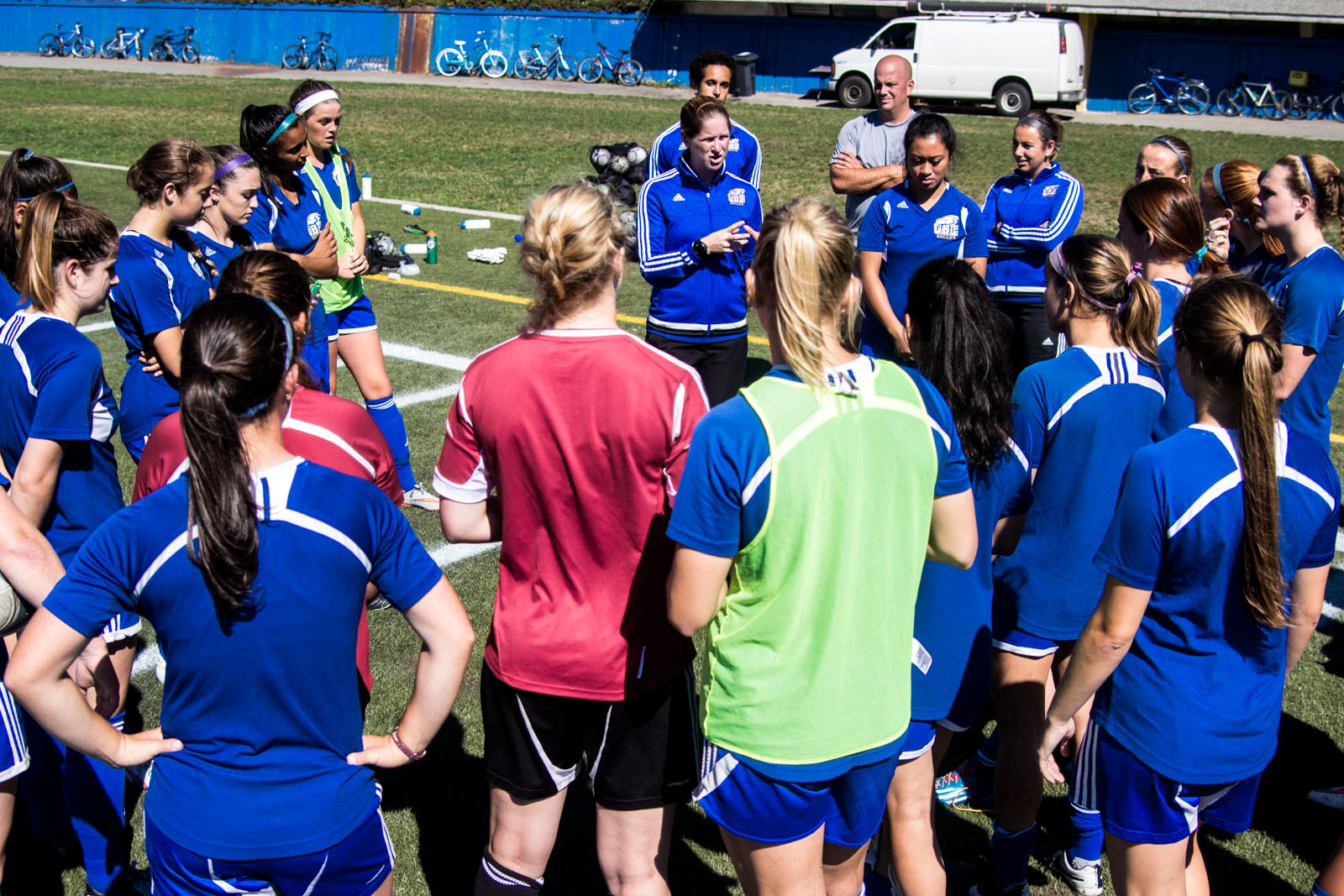 With a preseason record of 2-0-1, the T-Birds were off to a great start.

The ‘Birds took this great start into their first games. Despite having their first two games on the road, the T-Birds have managed to beat their two biggest Canada West rivals, teams that crushed them at the closing of last season. They defeated the University of Victoria Vikes, 1-0, thanks to a lone 45th minute goal by striker Jasmin Dhanda, and dished out a 2-0 loss to the Trinity Western Spartans, their first home loss in nearly two years.

Kovacs’ experience with coaching collegiate soccer means that she is well prepared for the season ahead. She was the head coach at the University of West Georgia between 2006 and 2012 and, in that time, transformed the fairly new team into a NCAA Div. II championship contender. She then spent two years with the Simon Fraser University men’s soccer team, where she was head scout and assistant coach to the team.

One thing that is evident is that Kovacs is bringing a new style and new standards to an otherwise unchanged team, as this year’s starting roster hosts the same faces as last year. The same team that contended last year for the Canada West will once again be taking on one of Canada’s toughest and most competitive leagues.

“Initially coming in, I just wanted to assess where we were and where our strengths were and where we maybe needed to improve. Once I did that, I saw that we were an extremely talented side and I think we can definitely contend for the Canada West championship,” said Kovacs.

This year, the UBC Thunderbirds will be hosting the CIS national championships, bringing the Gladys Bean Memorial Trophy to UBC for the first time in 25 years.

Although UBC is tied with Trinity Western for the most CIS title wins, five each, the ‘Birds have not won the trophy since 2006. And the only team that has won the trophy while hosting it, TWU, went on to win three more in the next five years. If this season goes well, the Thunderbirds can take the cup home and etch their names forever in history.

“I think we have a huge opportunity in front of us hosting nationals, and I don’t think that is lost on the team. I think they understand that, and they want to be successful this season," Kovacs said.

This could be the start of something new for the ‘Birds. At the very least they can push themselves into Canada West prominence. But Kovacs’ new Thunderbird team is not just looking to contend, they’re going for the win.

“It is an extremely tough conference but I think that we have the talent and the determination this year to hopefully make a run at that,” said Kovacs. “The motivation of hosting nationals is huge, and I think our players are up for the challenge.”

“We don’t just want to be a host, we want to earn our right to be there.” 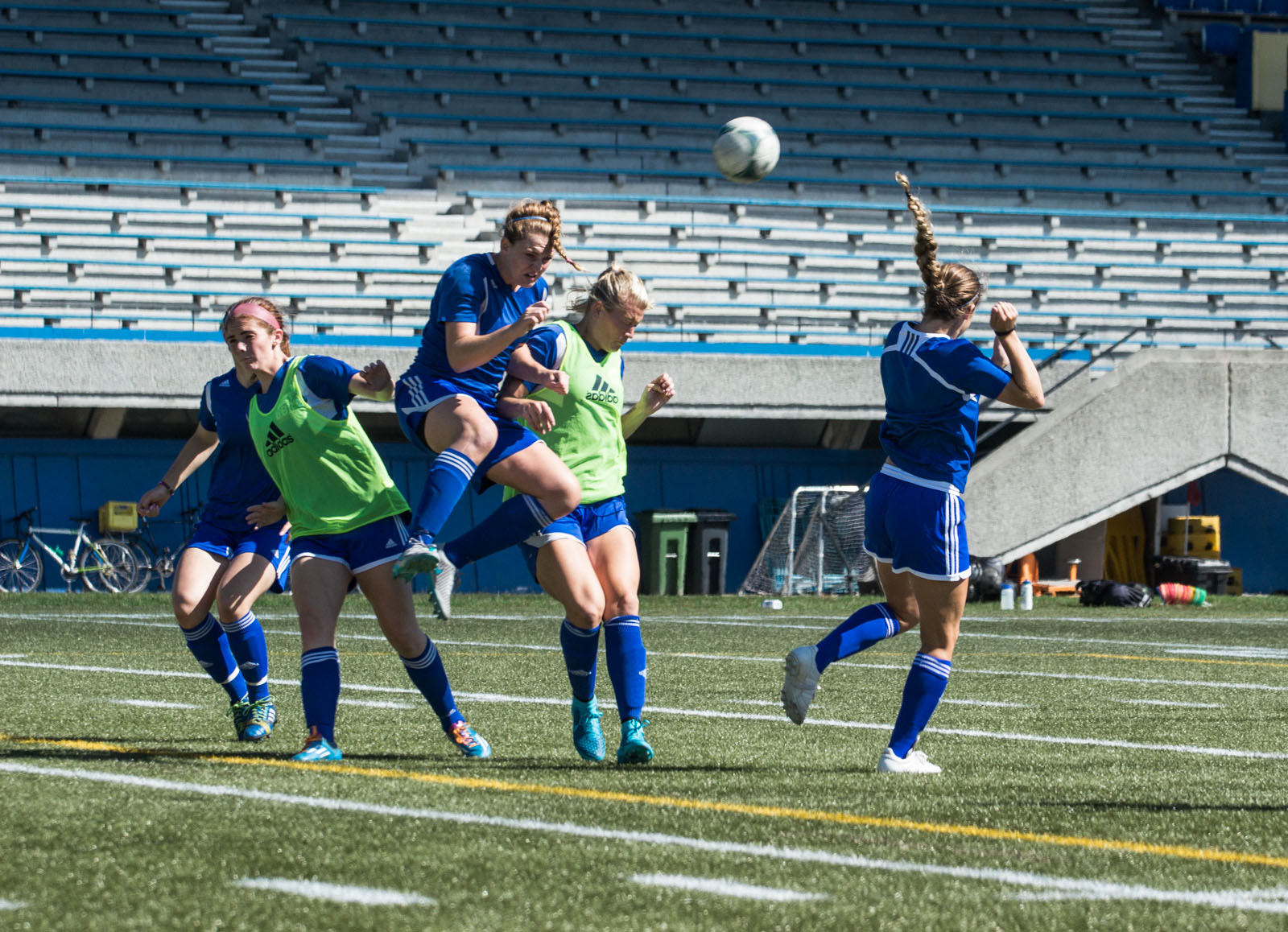