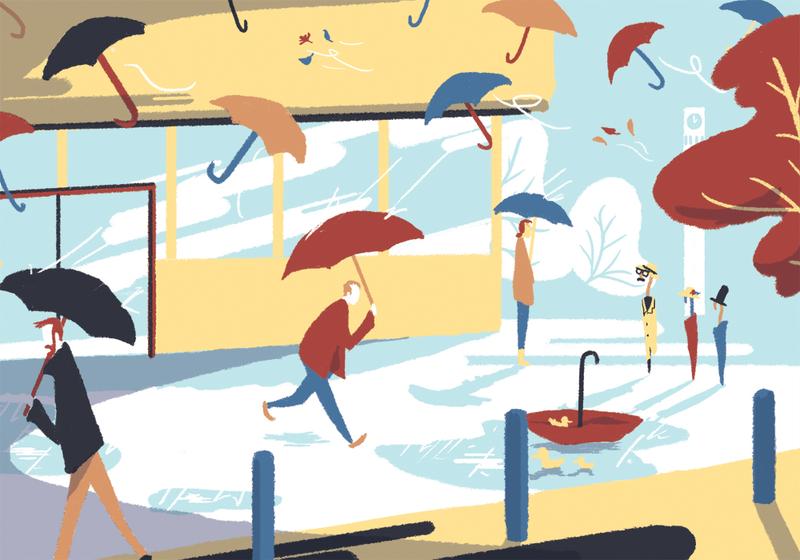 An umbrella sharing program is coming to UBC this fall.

The AMS has awarded $10,000 to UmbraCity to pilot a free umbrella-sharing service across campus.

“It was a couple of years ago when a bunch of friends and I were sitting at the old SUB,” said UmbraCity Co-founder Amir Entezari. “That’s where it was conceived … it was pouring rain and we didn’t have easy access to umbrellas.”

The umbrellas are free for the first 48 hours. Credit card information is required upon registration because two dollars will be charged each extra day up to a maximum of $20 at which point the umbrella is considered purchased. Once registered, a swipe of a student card produces your portable parasol. Users are not charged for breaking umbrellas.

Each kiosk holds 40 bright yellow umbrellas with a total of 500 owned by the company at this time, according to Entezari. One early challenge is umbrella traffic -- Entezari or his partner, Babak Assad, will stick around as an umbrella runner. After the trial, a student will likely fill that position.

“The value of this trial is to figure out what the key locations are on campus and what the demand is,” said Entezari. “We’ll evaluate the number of umbrellas being borrowed and we’ll get people feedback as to how we can improve the launch... We’re going to be expanding this on UBC as well as downtown Vancouver and beyond.”

Chiyi Tam, AMS Sustainability Coordinator, has worked closely on the project with UmbraCity and UBC’s Campus and Community Planning. The project’s funding comes from the AMS sustainability projects fund, an $112,000 sum levied by a $2.25 per student fee established by referendum in 2011.

“Something that really connected with us was that the whole system has an end of life plan,” said Tam. “All the materials that are going into the system will get recycled at the end.”

The umbrellas are made of a high quality material, according to Tam and Entezari, which makes them reusable even after damage. Entezari plans to donate the material to the Common Thread Co-Operative, a not-for-profit in Vancouver’s Downtown Eastside that makes new products from used materials. The company’s purpose is to provide employment and sewing training to “newcomers to Canada, people living with mental illness and others,” according to their website. Entezari is still in conversations with the co-operative.

Both UBC alumni founders are still living in Vancouver. Assad completed a PhD in electrical and mechanical engineering in 2014 and Entezari completed a bachelor's degree in computer science in 2009. UmbraCity is following in the path of New York’s ’Brellabox, the first umbrella sharing company launched in 2013.