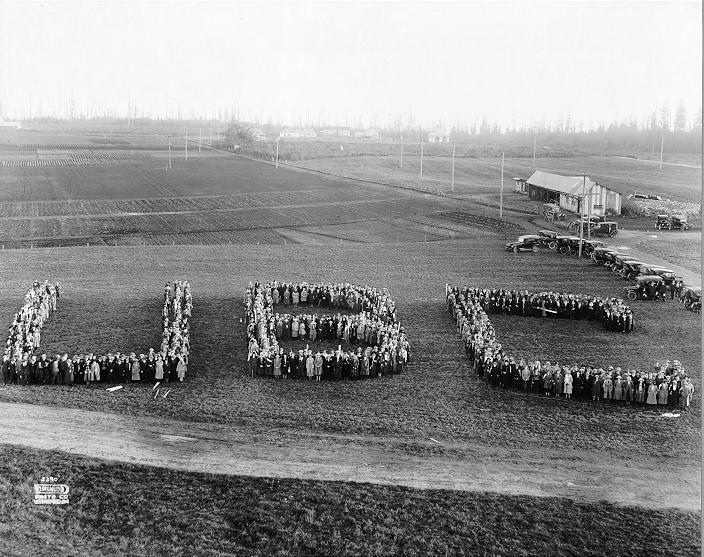 We celebrated the centennial anniversary of the Great Trek in late September this year, but did you know that's not the only Great Trek in our history? Here's an outline of the other times UBC students have marched for their needs and their future.

The Great Trek: “The Pilgrimage”

World War I had halted construction of the UBC campus in Point Grey and forced students into crowded lecture halls, substandard laboratories and improvised teaching spaces such as a “chemistry tent.” Six years after the war’s end, the government had still failed to resume construction, inspiring the students — led by AMS President and war veteran Ab Richards — to launch the “Build the University Campaign.”

The climax of the week-long awareness campaign was The Pilgrimage, which would later be named The Great Trek. Armed with banners, signs and a marching band, 1,200 students marched from Downtown Vancouver to the unfinished Point Grey campus on September 28, 1922. Settling inside the concrete and steel framework of the half-finished science building, the students asserted ownership of the campus and cemented it with the dedication of a cairn that still stands on Main Mall today.Persuaded by the 56,000-signature petition gathered by students, overwhelming public support and the powerful student movement, the government resumed the construction of the Point Grey campus.

The Second Great Trek was also a demand for the government to increase funding for university facilities, which were needed to accommodate the growing number of students. AMS President Donald Jabour, Treasurer Allan Thackray and chairman of the Second Great Trek Committee Ben Trevino trekked to Victoria. There, they presented the Provincial Cabinet with 86,000 signatures on a petition as well as an impressive brief on the fiscal situation of the university that they had prepared.

Shortly after, the provincial government announced — that in addition to the $10 million it had already committed to development — it would match any contribution to the university of up to $5 million. The Second Great Trek resulted in an extension to Brock Hall.

The Third Great Trek: “Back Mac”

In January 1963, UBC President John B. Macdonald produced a report detailing the need for more government funding for higher education. Although Premier Bennett had promised more financial support for UBC, Macdonald’s report was ignored. In February of that year, UBC’s operating grant from the provincial education budget was cut by $1 million. Students rallied behind Macdonald’s demands for increased funding and access to education. They boycotted classes, sent a 30-foot long telegram to the provincial legislature and formed a committee to oppose fee increases. Even the faculty joined the AMS in fighting fee hikes.

On March 14, 1963, 3,500 students trekked from Sunset Beach to the Vancouver courthouse while 5,000 others travelled around the province to gather 200,000 signatures to petition the government for more funding.

When the looming expansion of market housing on campus threatened the UBC Farm, an AMS club called Friends of the UBC Farm set out to gather support to secure the farm’s land. The club presented UBC President Stephen Toope with a 16,000-signature petition and Metro Vancouver expressed their support for the farm in a letter to the university. The “Save the Farm” campaign culminated on April 7 when over 2,000 people marched from the SUB to the UBC Farm.

The Board of Governors heard the students’ demands and announced that no market housing would be built on the farmland. However, the housing density that was slated for the farm is being distributed to other areas of campus.