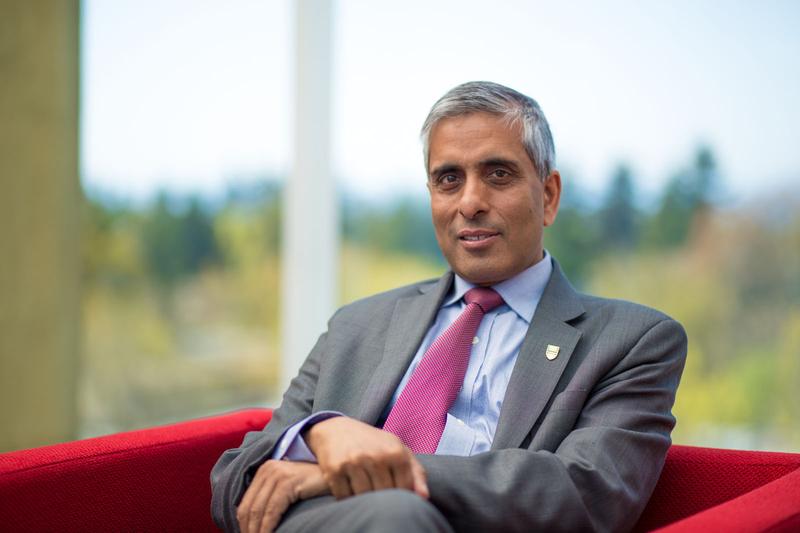 The Board meeting that accepted the resignation of former President Arvind Gupta took place just over a week before the public were informed. photo Cherihan Hassun / The Ubyssey

The release package regarding former President Arvind Gupta’s resignation was finally released after months of waiting. The package is 861 pages in length and is heavily redacted, leaving the ultimate reason of Gupta’s departure still unknown.

“The redactions are done here by the Office of the University Counsel and they’re done in accordance with [Freedom of Information and Protection of Privacy Act] legislation,” said Philip Steenkamp, vice-president external relations and communications. “And then in this instance there’s also a non-disclosure agreement with President Gupta ... so we rely on legal counsel here to interpret the act.”

The first mentions of Gupta's resignation in the slew of emails and board documents released pertain to the benefits he received upon departure. The fact that he would receive his full year's salary while on academic leave was known, but it's now also public that he received a $130,000 research grant and could have stayed in the Norman Mackenzie House residence until December 7.

Points 7 and 14 of this list of benefits are redacted. 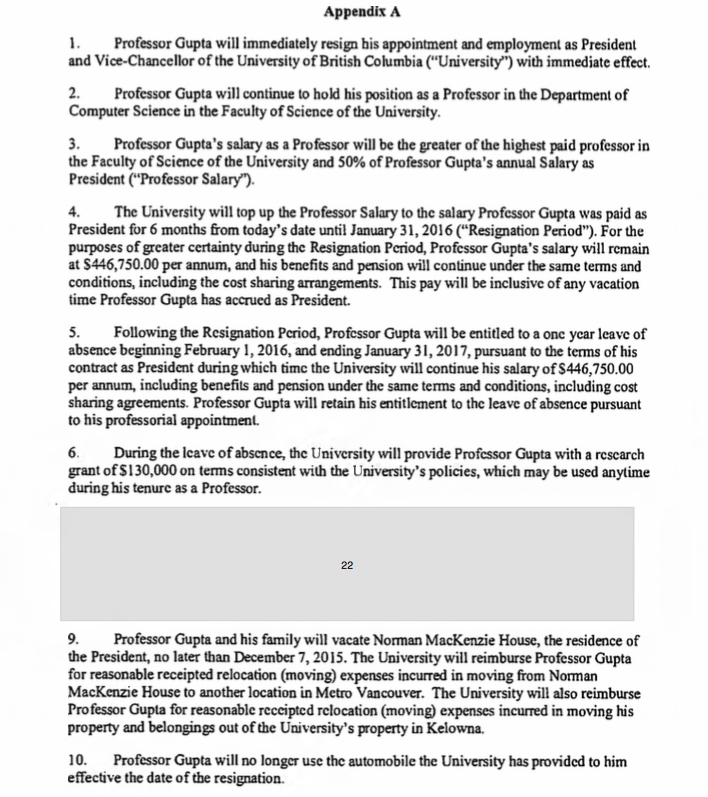 Appendix A of the release agreement between Arvind Gupta and the university. Screengrab via UBC Office of the University Counsel 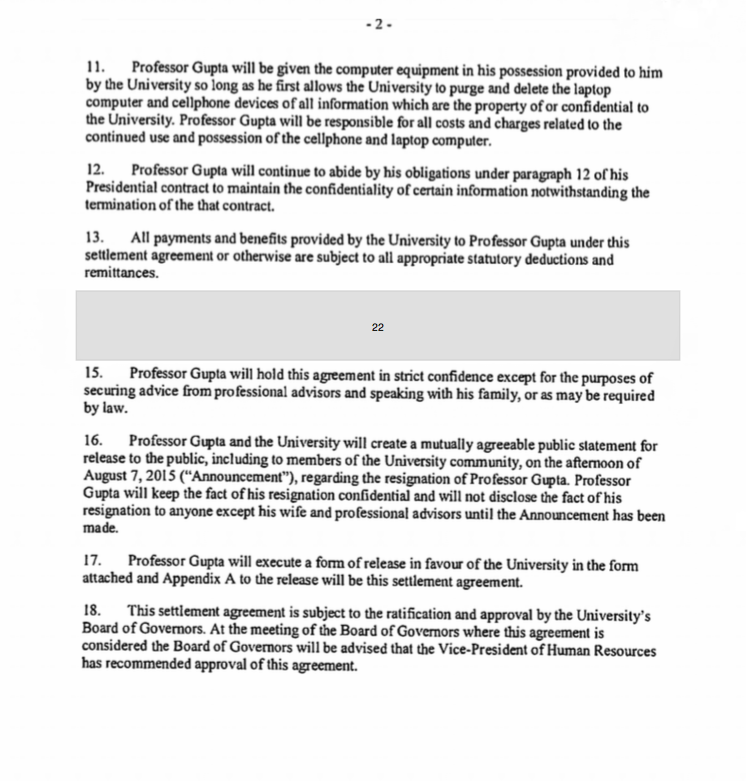 Appendix A of the release agreement between Arvind Gupta and the university. Screengrab via UBC Office of the University Counsel

“There's a whole bunch of stuff around individual privacy issues,” said Steenkamp. “I appreciate the frustration on it but it is the application of legislation.”

Some parts of the document hint at issues, but what these are and whether they were resolved remain to be seen. On May 12, Reny Kahlon, Board of Governors secretariat, sent an email to members of the executive stating, “There will be a special Finance Committee Meeting to deal with the Housing Action Plan and few other items as per attached agenda. This will also serve two purposes: 1. Give focused attention to a sensitive issue that has long term impact on the institution.”

According to Susan Danard, managing directory for UBC Public Affairs, the email was referencing sensitive financial information shared at an in-camera meeting of the Finance and Property Committee.

Other items of note include a tentative timeline for the departure. On July 27, only a few weeks before the public announcement, former Board Chair John Montalbano sent an email to Gupta asking if Gupta had time to meet.

“We were hoping to squeeze in some time on the calendar if that were the case – obviously not optimal if you avoiding campus,” wrote Montalbano.

When Gupta asked what the agenda of the meeting was, Montalbano responded that he and Greg Peet, another Board of Governors member, “wished to have a quick, confidential discussion, not captured on email.”

Four days after this note about avoiding campus, Kahlon sent an email to all board members about an unscheduled, in-camera board meeting — not on campus. The secret meeting took place at Harris & Company LLP, 550 Burrard Street.

The purpose of the meeting was:

This article was updated at 1:22 on January 25 with comment from Susan Danard.