Protest disturbs Board of Governors meeting 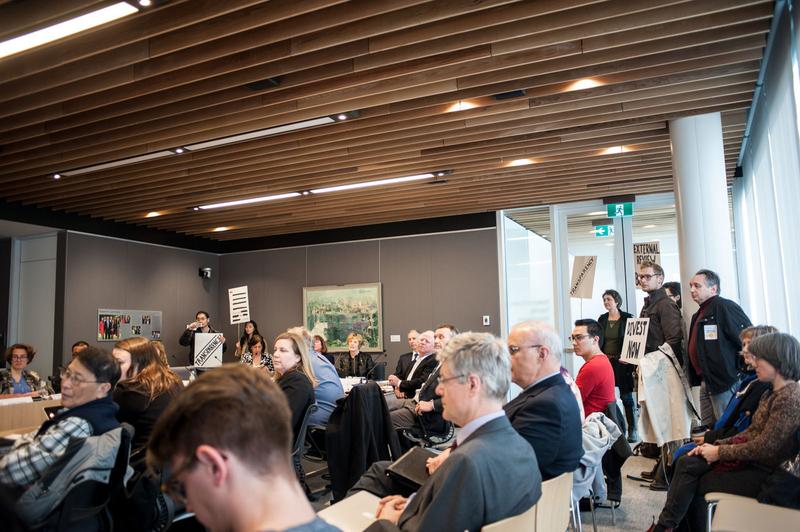 Only a few protestors were allowed to enter the room due to fire capacity according to board secretariat Reny Kahlon. Photo Kosta Prodanovic / The Ubyssey

Today’s Board of Governors (BoG) meeting was disrupted shortly after 1 p.m. when a group of protestors stormed the Robert H. Lee Alumni Centre to demand greater transparency from the highest level of governance at UBC.

The protest was organized by a grassroots group of faculty “who have had enough of the kind of bad governance that goes on at this university,” said Mark Mac Lean, president of the Faculty Association.

The group went with the hashtag #UBClean, the idea being that they want to clean out the current Board of Governors who hasn’t been able to get out of the spotlight this academic year for issues ranging from a lack of transparency to tensions between members of the leadership team.

Laberge: thank you for your comments, can't respond rn but incoming chair has some ideas for how to increase transparency #UBCBoG

At one point, the Board was forced to suspend the meeting for a few minutes and allow protestors into the room, because it was impossible to hear anyone speaking over the chanting going on outside.

#ubcbog members attempting to talk over the chanting outside pic.twitter.com/k7WdLRVNHH

“I'm just concerned about governance at the university, that it appears that the Board is acting in a way [that’s] undocumented and really unjust,” said Alan Mackworth, professor of computer science, emphasizing that this injustice really pertains to the fact that a small subgroup of the board decided to tell former President Arvind Gupta they had lost faith in him — a tense relationship that would catalyze Gupta’s now-infamous resignation.

The latest scandal in the news that sparked the protest had to do with exactly that — the way in which former board chair John Montalbano, along with several other members, formed an ad hoc committee that met for an unscheduled, undocumented and off-record meeting which ultimately resulted in Gupta’s resignation.

This, members of the the UBC community say, is completely against the principles of transparency and accountability.

“If we look at their demands, it's actually pretty reasonable,” said student protestor Penny Zhang, speaking about the Faculty Association. “So it just goes to show the BoG has just gone over everyone's head.”

After rallying speeches by both Mac Lean and Jennifer Berdahl, Montalbano professor of leadership studies in gender and diversity at Sauder, the group of protesters followed Berdahl and others into the alumni centre.

Around 20 members of the sizeable crowd — of which no exact numbers are known, but appeared to number between 150 to 200 — were allowed into the actual meeting while their counterparts shouted, “Ours, not yours,” “More PhDs, less CEOs,” and simply, “Resign.”

Albina Gibadullina, a student protestor, attended because she was dissatisfied with the practices of the governing bodies at UBC.

“We have seen in the last year how ... [the Board] lacks transparency,” she said. “We have seen how certain interests dominant the politics on campus.”

The protestors finally left the area outside the Board meeting room after over an hour of protesting. One faculty professor spoke at the end of the open session of the Board meeting, asking members “not to leave today pretending that nothing happened.”

Take responsibility for situation, make commitment to change it, the bad press isn't going to stop for this uni if you don't change #UBCBoG

“Universities are fundamentally places where the free exchange of ideas is welcomed and encouraged,” said Philip Steenkamp, UBC VP external, in an emailed statement. “Today’s protest is an expression of that core value. The Board, with representation from students, faculty, staff and alumni as well as appointed members, is committed to hearing the views of all members of the university community and has an ongoing commitment to evaluation, reviewing best practices and continuous improvement.”

This article originally cited Mark Mac Lean as the first speaker at the protest. The Ubyssey regrets this error.

This article has been updated to include comments from UBC.