Rob Morton had a vision for Oktoberfest. The founder of The Calendar wanted to create an annual event at the War Memorial Gym on campus, mimicking the massive German beer halls taking place around the world this month. UBC Oktoberfest wouldn’t be limited to a tiny proportion of the student population — it would be able to accommodate hundreds of students from different social circles and clubs.

For weeks, his vision looked like it was coming to fruition. According to emails between The Calendar and War Memorial Gym Facilities Coordinator Jenny Black, progress was being made well into late September. Discussions were had about capacity and price.

Then three weeks before the event, The Calendar received an email familiar to other student event organizers on campus.

“I am saying no this time, and likely no to any future requests ‘in season,’” wrote Black, referencing the varsity athletic seasons. “I know that your group has delivered many successful parties and I wish you all the best with planning your next social event.”

Oktoberfest went ahead last night at Koerner’s Pub on the far edge of campus. But Koerner’s capacity was capped at 500 — less than half of what War Memorial Gym could have potentially held for the night of celebration and camaraderie.

Since Arts County Fair was cancelled due to a lack of funding in 2007, there’s been a perception on campus that students can’t be trusted to organize events like beer gardens, concerts and social mixers involving alcohol.

The perception used to be well-founded. Aside from racking up large amounts of debt for the Arts Undergraduate Society (AUS), Arts County Fair was known to be a messy affair. “I saw vomit and unconsciousness [as well as] tens of thousands of my fellow UBC students reducing themselves to a hostile, self-degrading sea of intoxication,” said an op-ed by AMS exec Lyle McMahon in 2005.

In 16 years of Arts County Fair, the Arts Undergraduate Society gave out 100,000 condoms. Now you know.

Since 2008, the RCMP’s university detachment has become more proactive in limiting the special occasion licenses (SOL) needed for private events at which alcohol is be available. A UBC Insiders investigation in 2009 found that the vast majority of SOLs didn’t go to student-organized community events. When they were granted to students, the regulations for each event approved by the RCMP and campus fire marshal varied hugely from case to case.

The RCMP, which did not respond to a request for comment from The Ubyssey, had a generally hostile attitude toward campus parties and licensed social events in the aftermath of Arts County Fair.

“Nobody out here qualifies for a special occasions license,” Sgt. Dan Wendland told The Tyee in 2009. He claimed SOLs were exclusively intended for events like weddings and bar mitzvahs, not “weekly beer gardens, daily beer gardens, drunkfests, whatever [students] want to call them.”

As UBC Insiders noted, the sergeant was wrong about whether a beer garden or “drunkfest” could legitimately qualify for a special occasion license. However, his comments point to the difficulties facing students trying to hold licensed events on campus.

Fire marshal Marcus Von Minden is responsible for setting maximum occupancy numbers for campus events and has also been making it harder to organize events at UBC. The UBC Fire Department did not respond to comment. 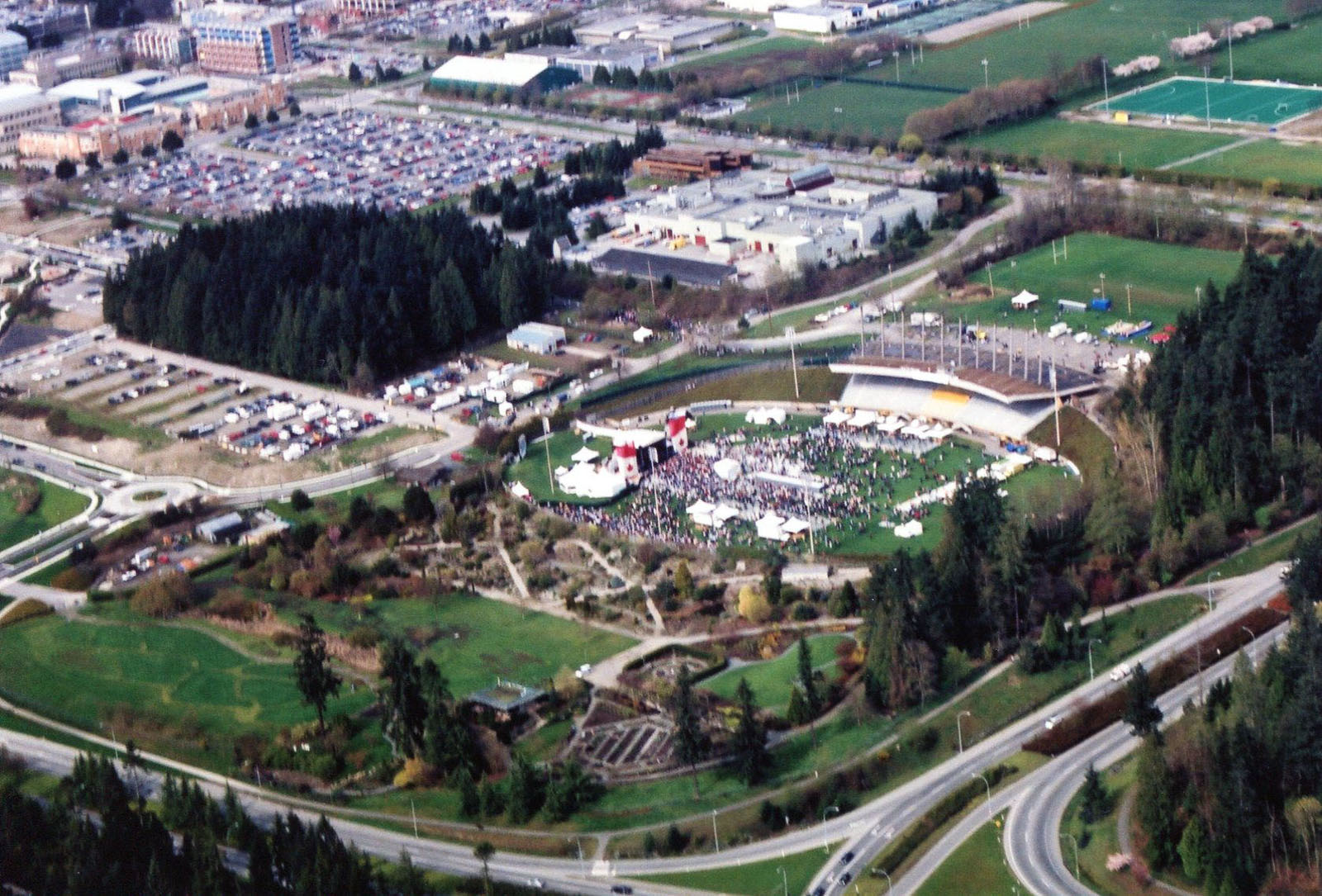 In its heyday, ACF drew crowds of up to 15,000 students. Photo courtesy AMS Archives

Both the AUS and the Science Undergraduate Society have seen the capacity of their student buildings drop by around 30 per cent since Von Minden was appointed in 2009.

“I hate when I see restrictions from the university controlling student life,” Talingdan said. “It just doesn’t make sense to me.”

AMS President Aaron Bailey understands the difficulty of organizing events at UBC first hand. He has spent the past four months working to find a permanent location to host Block Party, the year-end concert which replaced Arts County Fair in 2008.

They show an automatic negative bias towards student organizations and fun on this campus because they don’t believe students and the AMS are capable of running safe, secure and enjoyable events.

Bailey determined that, following the destruction of MacInnes field to build the new Aquatic Centre, Thunderbird Stadium was the sole venue on campus with enough capacity for the concert. Block Party has easily sold out 7,000 tickets in the past, only to be told that certain members of the university administration had instructed UBC Athletics to refuse the AMS permission to use the stadium.

“It’s complete disregard and disrespect,” Bailey said of the negotiations, which he sees as the university leading the AMS on. “It’s a continual sense of appeasement: ‘We’ll listen to you when it’s convenient for us and then we’ll just tell you no with no explanation.’”

For Bailey, who will be leading an AMS campaign to save Block Party, the administration’s intransigence on finding a venue for it is especially painful. That’s because he sees Block Party as an important physical manifestation of the UBC community.

“It’s that one day a year that everybody knows about and everybody looks forward to in terms of getting together and celebrating what it means to be a UBC student,” said Bailey.

VP Students Louise Cowin declined requests for an interview regarding the use of Thunderbird Stadium for Block Party and the difficulty of hosting student events on campus.

“We appreciate that this is an important event for students,” said she said through a spokesperson. “That’s why UBC is working hard with the AMS and other groups on campus to find a resolution that works for everyone.” 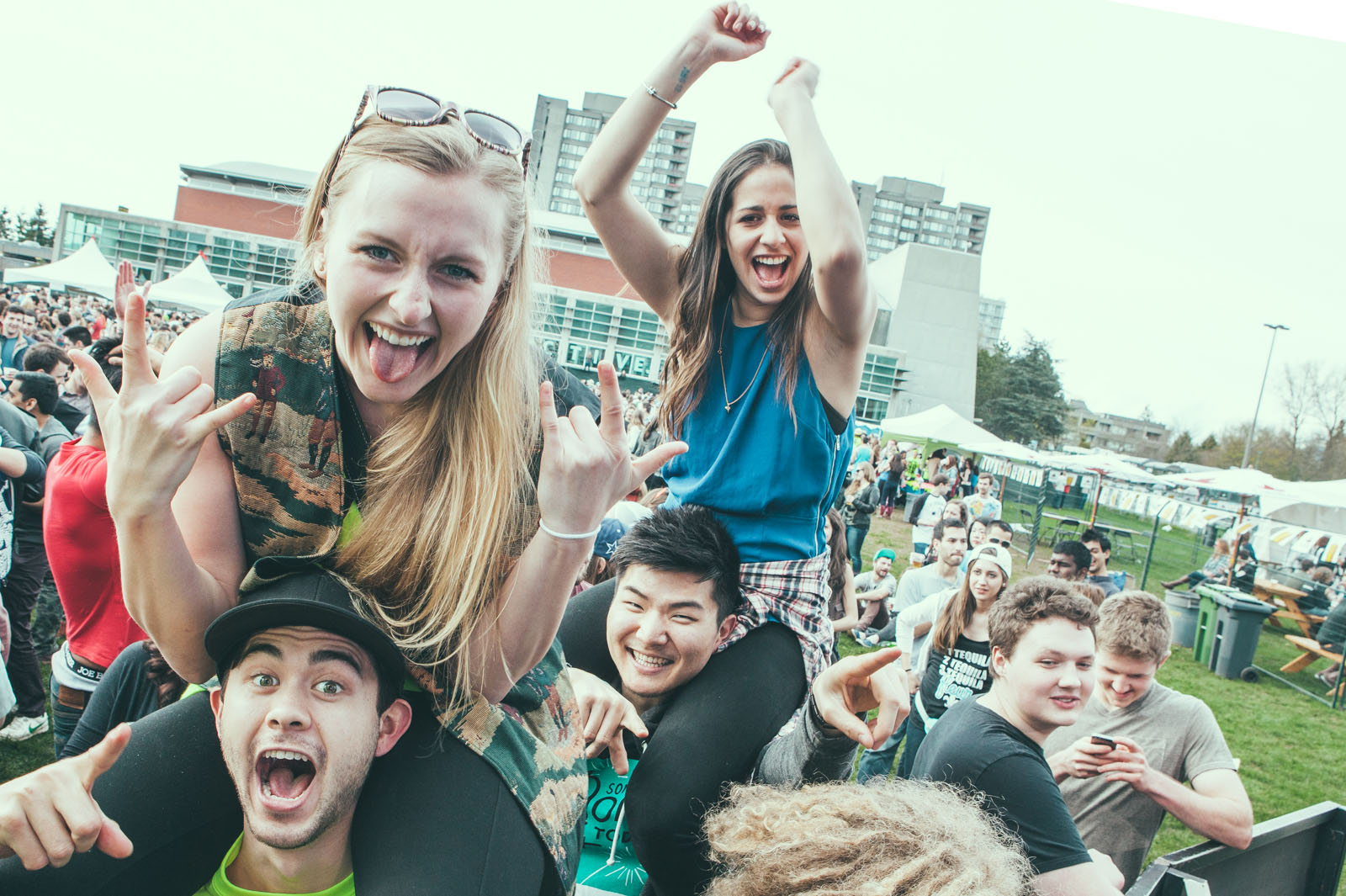 We like having fun. File photo Steven Richards / The Ubyssey

“The university doesn’t even need to facilitate or actively build this movement to have an even more fun and more exciting campus,” said an exasperated Morton, founder of The Calendar. “Students are doing it. All the university needs to do is gently move out of the way and provide a few resources.”

“Or not even — They literally just need to say, ‘Okay,’” Morton added.

No one can attest to this better than Anna Hilliar, AMS programming & events manager. For the past four years, she’s been in charge of making sure events like Block Party and Welcome Back Barbecue are successful — but this doesn’t come easily at UBC.

With the Welcome Back BBQ in September, for example, Hilliar and her team had just two and a half weeks to advertise and book talent because of the delays in getting space usage approval from the university. This is not a one-off either.

“We have to fight for it and beg for it and then eventually we do end up getting a space. But at that point, it’s a challenge for us to get things together,” said Hilliar.

Hilliar, like Bailey and Morton, has no complaints about the lower levels of the university bureaucracy. All three emphasized that the relationship between lower-level departments and organizations, such as AMS Events and The Calendar, have been improving in recent years.

“Everybody was very supportive … and then everything seemed to fall apart when it got up to the executive level,” said Hilliar of the Thunderbird Stadium negotiations. 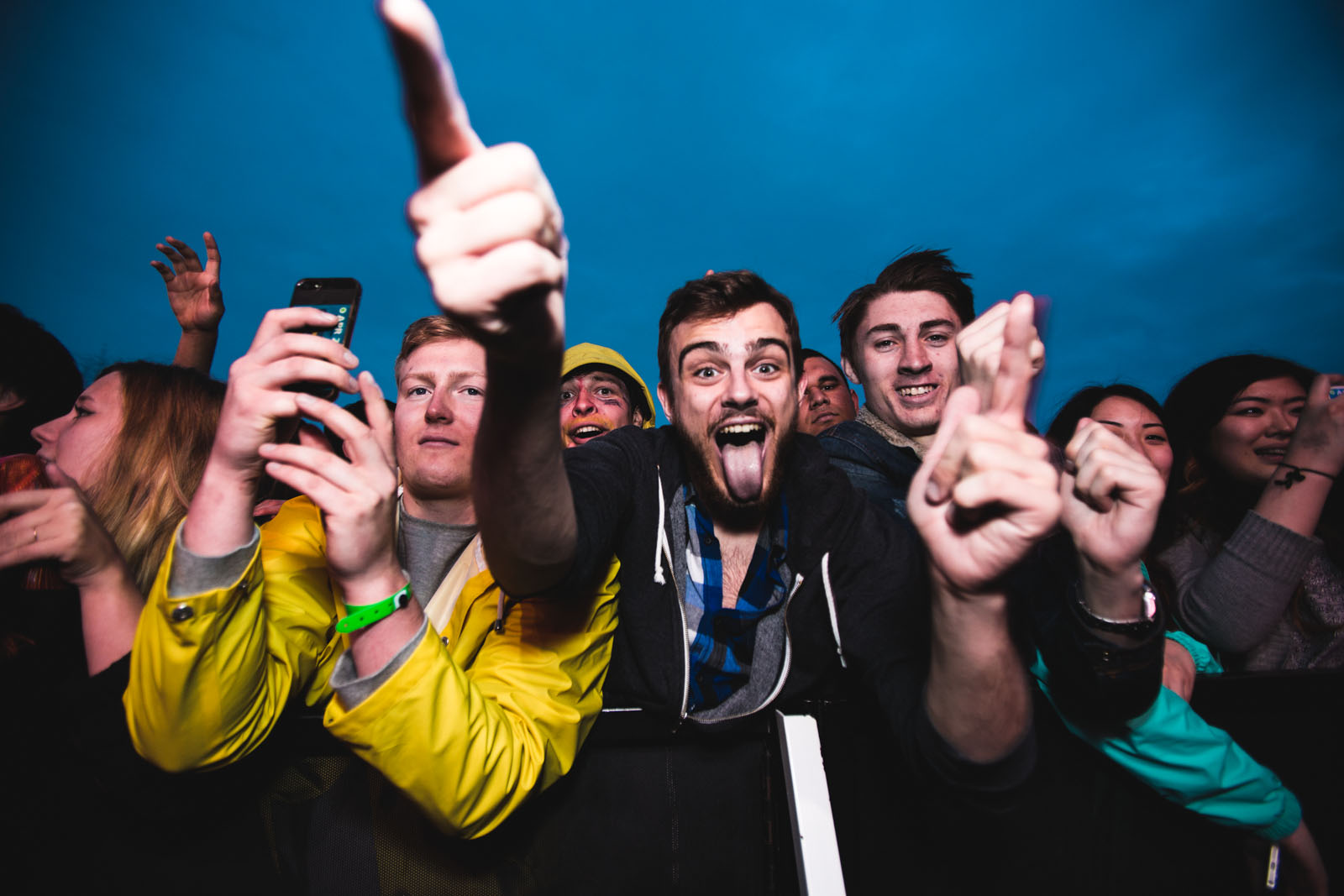 A lot of fun. File photo Cherihan Hassun / The Ubyssey

Bailey sees all this as revealing a fundamental problems with how the university sees the student body.

“They show an automatic negative bias towards student organizations and fun on this campus,” he said. “They don’t believe students and the AMS are capable of running safe, secure and enjoyable events.”

But the bias is not a well-founded one — student-planned events on campus have come a long way since the days of ACF.

Hilliar said that since she came into the job four years ago, she can count on one hand the number of ambulances called to Block Party.

David Sidoo, an ex-Thunderbird football player and Board of Governors member, noted that— despite having nearly 8,000 students at the licensed Football Homecoming event in September — there was not a single medical or police incident.

“I was really proud of that,” he said at the time. 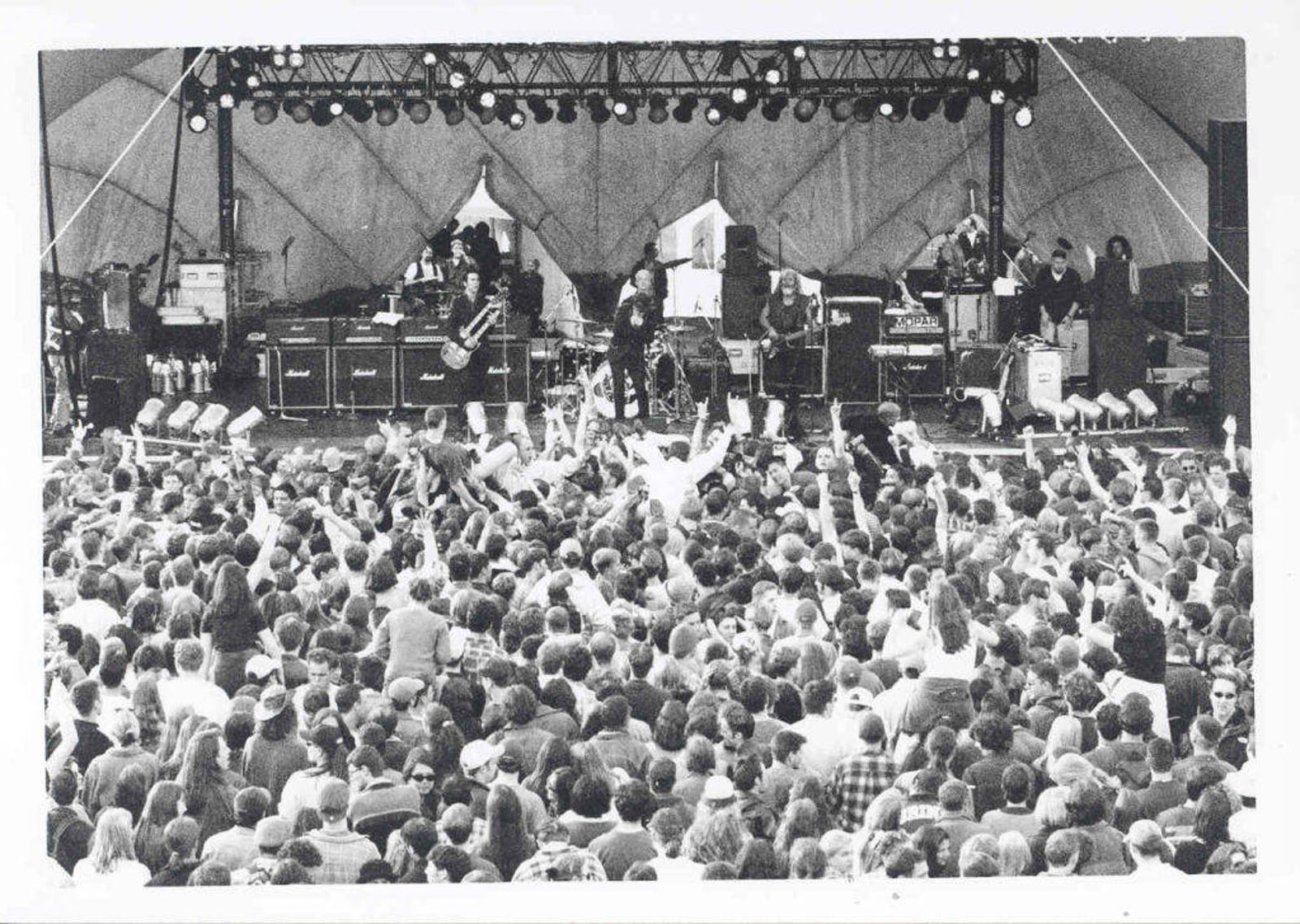 The mistrust of students is a wide-ranging problem with more serious effects than simply stopping students from drinking at campus parties once in a while.

Bailey and Morton both see direct causation between UBC’s high rates of loneliness, stress and depression among students and the university’s disrespect for students.

You don’t need to be a student at UBC Vancouver for very long to feel the lack of community engagement on campus. Morton started The Calendar for exactly that reason.

“From the time I left my residence to when I came home at night, I would see two people that I kind of knew and was just out super lonely all day,” he said of his first few terms at UBC.

Anastasia Gornostaeva, a second-year arts student, is unconvinced that there is a larger community at UBC with which to connect. “As a community connecting people together ... it’s kind of hard to unite the whole school,” she told The Ubyssey.

She attributes feeling at home on campus to the friends she’s made rather than a sense of a larger community on campus. She’s not alone — according to the AMS’ Academic Experience Survey this year, 46 per cent of undergrads don’t feel a sense of belonging on campus and 44 per cent have trouble making friends.

Gornostaeva was astonished to discover that other people share the same feelings as her.

“That’s awesome that I’m not alone,” she said.

It just seems so silly to not remove these barriers to helping students have a fantastic experience while they’re on campus. They just need to unlock a few doors and let students do the rest.

— Rob Morton, founder and director of The Calendar

It’s the kind of statistics found in the AMS survey that bother Morton the most – particularly when they’re so avoidable.

“It just seems so silly to not remove these barriers to helping students have a fantastic experience while they’re on campus,” he said. “They just need to unlock a few doors and let students do the rest.”

“We don’t feel welcomed.” said Hilliar as she often feels shut down by the administration when trying to plan events.

In a recent interview concerning the tuition increases currently going through, Interim Vice Provost Redish was asked whether the students’ voice entered into the university’s long term plan. She dodged and suggested not. “Am I proud of all the things we’ve done over the last 10, 20 years? I absolutely am,” said Redish.

Morton, Bailey, Hilliar and others are proud of the things they’ve done on campus too. But the fact that every event becomes an uphill battle when it reaches a certain size means that the ability to create any sense of overall community on campus through student-run events is extremely limited.

“All I want to do is create great programming for students and enhance student experiences and having to spend so much time on [bureaucracy] … means that we can’t do all the fun things that we want to do,” said Jenna Earnshaw, events coordinator at AMS Events and third-year arts student.

Bailey said some of these problems could be fixed if the administration took the voices of its constituents more seriously.

- UBC should encourage and support student efforts to hold events, including licensed events, on campus