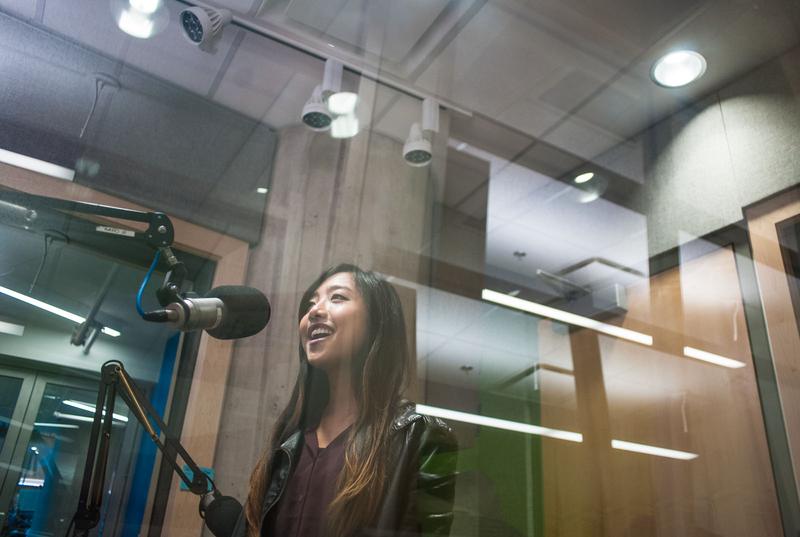 Tsai never had any formal training, but her wealth of experience in composing and music speaks otherwise.

They say that when you desire something, the whole universe conspires in helping you to achieve it.

Second-year pharmacy student Ariel Tsai desired no more than writing her own songs and sharing them on YouTube. The universe took a step further and made her an internet sensation as a singer-songwriter, catching the eye of well-known record labels.

Tsai is the co-founder of Big Brothers at UBC and a Kappa Alpha Theta sister. Tsai loves music and is a self-taught recording artist. She is like any other involved member of the UBC community, but with her hobby taken to a whole new level.

Tsai’s first video got featured on a Taiwanese talent show and garnered nearly 10,000 views within a day in April 2015. She was then invited by Meipai, the Chinese equivalent of YouTube, to create her own channel as an artist. Her second video attracted over 715,000 views and she has more than 50,000 followers to date. The production team behind The Voice of China invited Tsai to go on their reality talent show, Sing My Song, which features singer-songwriter contestants performing their original compositions instead of covering songs by other artists.

Last week, Tsai was invited by the Chinese Students and Scholars Associations (CSSAs) in the nine Vancouver post-secondary institutions to compose the theme song for their annual singing contest and appear as a special guest at the contest finale. Tsai composed, arranged, recorded, mixed and mastered the song. The typical length of time for a professional studio to properly cover all these aspects of music production is two months. Tsai did all these in three days while bracing herself for two midterms — the common fate of all students.

Despite her status as a rising Mandopop star, Tsai has a girl-next-door demeanor. Originally from Taiwan — the hub of Mandopop — Tsai immigrated to Canada when she was three and then moved back to Taiwan at age nine before returning to Richmond, Canada in grade 10.

“Those years of being in Taiwan helped develop my sense of appreciation for [Mandopop],” said Tsai. “I was amazed by … the melody progression [in] Chinese songs …. Usually, English songs [are either] very mellow or just like beat beat beat and then rap — there’s not a lot of melody going on. When I first listened to S.H.E. or Jay Chou, I was like, ‘Oh wow, there’s actually musicality in it,’ and I fell in love.”

Tsai describes her music as “ballad-style [and] very emotional,” but craves challenge and has recently been experimenting with R&B.

So far, Tsai has recorded six songs and signed with Seed Music Group — the same record label that renowned Mandopop singer David Tao is under — and will be releasing her own EP in early October this year. Despite the promising music career path lying ahead, Tsai is insistent on continuing her pharmacy studies at UBC and turned down interested talent agencies’ requests that she relocate to Asia.

“To get to pharmacy, I worked hard. I like pharmacy. I like being able to interact with patients. I like the health science area,” said Tsai.

Tsai has a lot of experience on stage from her position as a lead singer and worship band leader at church. She wakes up at 7 a.m. on Sundays to rehearse for the 10 a.m. service performances where she leads a congregation of 100 to 150 people.

The inception of her music career might be an act of self-fulfillment, but the proudest achievements that Tsai gleaned from her success are the empowerment of others.

“I remember people messaging me, asking, ‘Can you give me the music sheet because I want to sing it at my sister’s wedding.’ Then there’s another person saying, ‘I want to propose to my fiancée. Can I have the music sheet?’ I felt really honoured … I was like, ‘Whoa, people are actually taking this seriously!” said Tsai. “That really touches my heart … people value [my music.]”

Tsai never underwent any formal training besides joining choir in junior high school back in Taiwan. She self-learned all aspects of music production. Composing-wise, she was the music coordinator for her high school's annual drama for two consecutive years as well as conducted a choir in her senior year. Arranging-wise, she performs different covers in church weekly.

“Having different experiences in music is pretty important to make your music more well-rounded [and] diverse,” she said. “Everything that I have today is all because of the past experiences that I was exposed to ... it all makes sense now ... it all adds up.”

Tsai shines with confidence. She is a force of nature, unleashing her seemingly endless energy with such finesse. She is the shining star of the Mandopop scene tomorrow. She is a dedicated pharmacy student. She is the exemplar of what the UBC motto, Tuum Est, should represent– both in UBC and in her life.