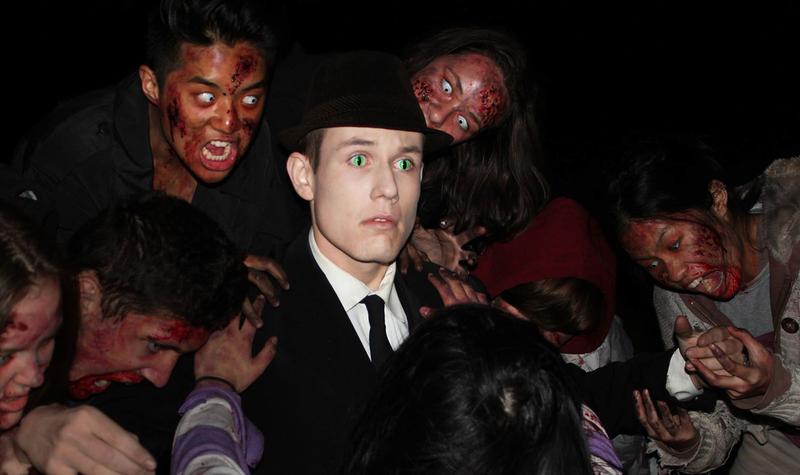 Spending a Tuesday night as an agent for NASA frantically running away from angry, famished zombies isn't something that happens ... ever. Alien Contagion: Rise Of the Zombie Syndrome is the third Zombie Syndrome production created by Andy Thompson.

It all began at a top-secret location, which was disclosed the night before the show. Everyone was gathered uncomfortably in groups here and there in the waiting area.

“Have you done this before?”

“Yeah, it’s been amazing and we have been here so many times that I expect it to be just as awesome!”

Then an army sergeant walked in through those doors with a great deal of purpose.

“Are you the NASA agents?” he yelled. The audience nodded – fully aware that this was going to be a completely unforgettable theatrical experience.

In one word, the performance was unexpected. The audience is directly involved in the plot, completely separating it from any form of "traditional" theatre.

The audience is assigned different roles that are vital to the mission’s success. The mission details are given – super advanced aliens have created a zombie plague to save the Earth from destructive human beings and global warming.  The audience is challenged to venture out on an epic quest to save their species before it’s too late.

The fun part of this production is that it throws out some of the etiquette observed in traditional theatre. They encouraged the audience to use their phones in order to solve problems that have been put forward.

The production was terrifyingly realistic. Although there were some people that weren’t fazed by the zombies that would lunge forward at you from in the dark, their groans were absolutely blood curdling. The first zombie sighting is a "safe" distance away, but as the production continues, they don't hold back.

The performances put on by the actors, from the soldiers to the undead, were so believable and put the audience totally into the moment.

The most impressive performance of the entire night was by a young woman who played a girl “possessed” by the alien pilot. She absolutely nailed how the alien being was rejecting her human form.

At the culminating point of the entire production, the audience is given a choice to determine how the play ends — a complete twist.

For a terrifying, exciting experience, The Virtual Stage performance is highly recommended and perfect for the Halloween season.